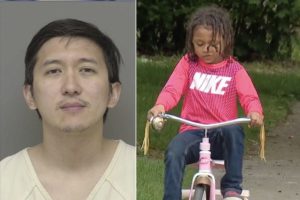 Many were outraged when Ryan Le-Nguyen got out of jail for $10,000 after shooting a 6-year-old boy. But the family of Coby Daniel isn’t letting their foot off Ryan’s neck.

On Thursday, Coby’s father, Arnold Daniel, filed a $4 million lawsuit against his neighbors Ryan Le-Nguyen and Michael Inhmathong, TMZ reports. Arnold says his son is still struggling to recover from the shooting, and the family foresees hefty medical bills because of it.

The charges stem from a June incident when Coby was playing outside his home and grabbed his bike, which was sitting on Le–Nguyen’s property, Fox 2 Detroit reports.

At the time of the shooting, Le-Nguyen was given a $10K bond and bailed himself out of jail. But after community backlash, cops re-arrested him and increased his bond to $100,000, as noted by USA Today.

Arnold recalls Le-Nguyen coming out with a sledgehammer and saying something to Coby. Arnold said after his son said something back to Le-Nguyen, the crazed neighbor went back inside and shot the child through the front window, hitting Coby in the arm.

“He tried hitting me with a sledgehammer but that’s not going to work because I’m too fast. [Then he] got a gun and BOOM shot me right here,” Coby said.

In Arnold’s recent lawsuit, he says Coby is still in pain and shock from the incident and will need professional help in the form of trauma counseling, psychiatric and psychological counseling. The suit says Le-Nguyen and Inhmathong knew children lived and played in the area, and they had the responsibility to keep them safe.

Arnold also cited the “aggressive behavior” Le-Nguyen showed to his son. Arnold is seeking $4 million in damages from his two neighbors for the violent shooting incident.