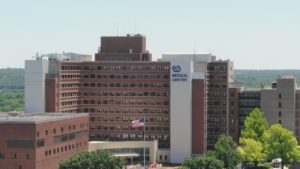 A Black man who previously worked at Kansas City’s Veteran Administration Hospital filed a civil lawsuit in federal court last week over claims of being racially discriminated against.

Michael Hill worked as an accounting technician but claims he was forced to quit two years ago. Hill has since become one of the 50 current and former employees who claim to have experienced racism in the workplace, Kansas City reports. Hill filed his lawsuit in U.S. District Court for Western District of Missouri on Friday over claims he was forced to resign in 2019 after working there for nine years.

Hill’s lawsuit recalls a number of alleged incidents dating back to at least 2013 where Hill says he heard workers using racist slurs toward the Black staff. Phrases like “you people,” “ghetto” and “nappy-headed,” were allegedly used to belittle Black workers.

In the suit, Hill claims he was called “boy” so much that it eventually became his official nickname at work. After complaining about the name, Hill claims white employees would still call him “boy” and make a mockery out of his request not to be referred to that way.

“Oh, I guess I better not say that,” the suit says employees would respond.

Hill also claims that he was called a “crackhead” at times and physically pushed out of meetings, KSHB reports. In the suit, Hills says he started to suffer from panic attacks after seeing the white employee who called him a “crackhead” get to work remotely while he was forced to come into the office.

“While she was teleworking, her certificates were left on the wall. A white supervisor, while perusing the teleworking co-worker’s certificate, said that Plaintiff was not wanted at the KCVA,” court documents state.

The suit also stated that Hill was “repeatedly ignored” for promotions and “required to train new individuals to take higher grade positions over him.”

“Plaintiff was the only African American male accounting technician in the Fiscal Department. From the start, his two Caucasian supervisors began isolating him from his coworkers and stripping him of his duties,” documents state. “He was required to send every email he generated to his trainers and supervisors, unlike any other employee.”

Hill has two master’s degrees in accounting and is a certified public accountant, but the suit says white workers repeatedly told Hill “his degrees were not real, were not earned or were not helpful” in the fiscal department.