Goodbye Volcano High was one of the most eye-catching console exclusives from the PlayStation 5’s reveal presentation. The coming-of-age story centers on high school teenagers dealing with the pressures of advancing to the next stage of their lives. They also happen to be strange, dinosaur-esque creatures. We still don’t know a ton about it, and that might remain the case for a bit longer because the intriguing narrative title has been delayed to 2022.

Developer KO-OP tweeted a message announcing the delay, explaining that pandemic-related challenges and the fact that the game’s story has been rebooted are the two primary factors for the change in release timing. The team also states that they want to avoid crunching to get Goodbye Volcano High out the door sooner. You can read the team’s message below. 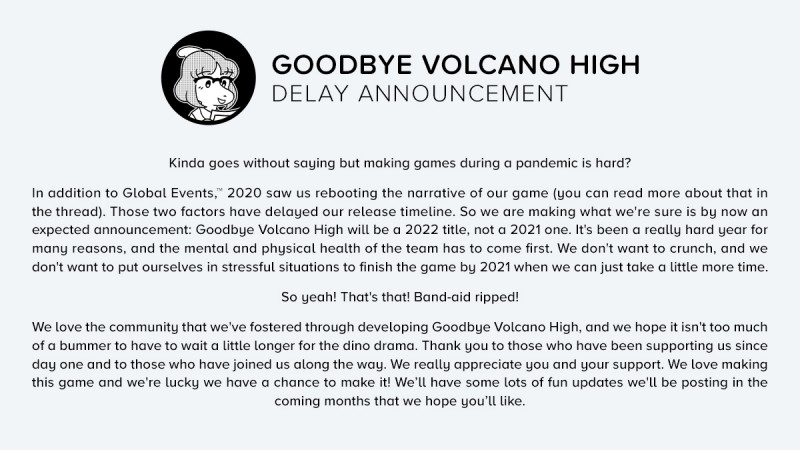 Goodbye Volcano High stars Fang, a student and musician coming to terms with their final year of school and all of the changes that lie ahead. They’re joined by their best friend and bandmate, Trish, and other colorful characters in a story about coping with the end of an era and figuring themselves out before it’s over.  Check out the reveal trailer if this is your first time learning about the game.

The game never had a concrete release window beyond “2021”, so the setback probably won’t sting as much as some of the other delays to occur this year. You also have to respect that the team is willing to overhaul its storytelling to ensure quality while also not overworking its employees to do so. We can’t wait to eventually see more of Goodbye Volcano High when it launches for PlayStation 5, PlayStation 4, and PC.

Although LeVar Burton's 'Jeopardy!' Ratings Were Low, Several Factors Were Working Against Him