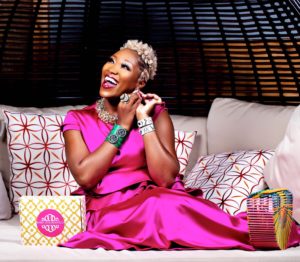 Charis Jones is a successful entrepreneur who knows what it’s like to risk it all to make a dream come true.

The Richmond, Virginia-based mother of twins once worked in sales and marketing for Fortune 500 companies but felt joyless and dissatisfied working in her corporate career. Just making a living wasn’t making her happy so Jones took a leap of faith and launched a now flourishing fashion and beauty brand called Sassy Jones.

Her newest venture is a ready-to-wear collection which will launch July 22 under Sassy Jones.

In an exclusive interview, Jones told BLACK ENTERPRISE how she began selling accessories in 2016 and ultimately landed a show on the retail company, HSN.

in 2016, after making more money by selling jewelry and sunglasses at an expo in one day than she did working a full-time job for two weeks, Jones was inspired to figure out the next steps in her entrepreneurial journey but it surely was a sure-shot.

But she faced a new frustration of trying to set her brand apart by finding unique styles.

“I got frustrated because I was running into the same styles,” Jones said to BLACK ENTERPRISE. “All of the other boutiques were carrying the same things and I didn’t want my things to be easily identifiable.”

Feeling a bit discouraged, Jones decided to forge her own path by designing her own items.

Today, necklaces, earrings, bracelets, belts, scarves, handbags, lip gloss, fox fur vests, and more can be found on her website. Jones kept challenging herself to grow her brand, even if it meant selling her Mercedes to finance buying inventory for a tradeshow.

“Just for the record, we are not funded. I do not have an investor; (I) never pitched this brand a day in my life. We still don’t have a line of credit. We are a cash-run business. We work on American Express that we pay off every single month at the end of the month,” Jones told BLACK ENTERPRISE.

Jones pushed fear aside and dove into the e-commerce space. Her efforts were enhanced by the creation of The Sparkle Party in 2017. Jones started teaching followers how to wear things she sold on Periscope. Then, she began showcasing her items on Facebook.

“When I did my first Sparkle Party, we had like 12 viewers, and I made $600 for like that one live stream. And now we live stream and there’s like, there’s thousands. The average Sparkle Party views are like 30,000 views now,” Jones said.

The Sparkle Parties generate an average of $50,000 now, but Jones did not stop there. Her audition for an opportunity to have a HSN show led to exclusively designed items for “the third-largest retailer in the world.” The show, called “The Big Find – Sassy Jones Accessories” launched in 2020. However, Jones sells separate items through her brand.

“You should not let fear stop you,” Jones said.