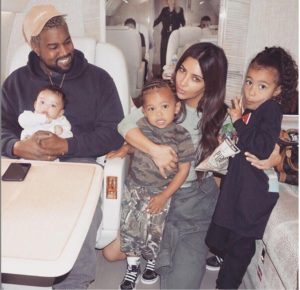 It looks like Kim and Kanye are going along to get along despite the fact that the two are in the midst of a messy divorce.

The Wests, Kim Kardashian, and Kanye, took some time out, waved the white flag and gathered the family together for a vacation this past weekend in San Francisco, according to Page Six.

The couple and their four children North, 8, Saint, 5, Chicago, 3, and Psalm, 2, were reportedly seen in San Francisco together late Friday. The famous family was seen eating breakfast on Saturday morning before heading out to the Asian Art Museum before the venue was opened for the public.

“They are getting along great, and it was their first public outing together as a family, reconfirming that they are in lockstep when it comes to co-parenting and putting their kids first,” a source in San Francisco told Page Six.

People also reported that a source has informed them that Kanye has “accepted” that estranged wife Kim is going through with the divorce and is planning to still be available and present in the lives of their four children.

“Kim and Kanye are spending time with the kids. Kanye has accepted that Kim wants a divorce. For a long time, it was very hard for him. He was disappointed. He has come around though,” the source says. “He wants the best for his kids. He is keeping things amicable with Kim so the kids can be happy. They have been spending time together as a family.”

After the family took in the sights at the Asian Art Museum, Kanye took a plane to Las Vegas, where he went to host a listening party for his upcoming new album, which is scheduled to be released this Friday, July 23. Kim was seen heading back to Los Angeles with the four children.

But Ye is perhaps still a little salty.

According to The Sun, at the listening party in Vegas for his new Donda album, Kanye played the song “Welcome to My Life” and reportedly likened living in his Calabasas home with Kardashian to jail, saying: “Tell the assassins I escaped from Calabasas” in the track, according to the outlet.

According to a source at the party, Kanye offers up a “very deep” reflection on his marriage with Kardashian, the outlet reports.

Kim had filed for divorce from the mercurial rapper and ex-presidential candidate earlier this year in February after being married for six years.