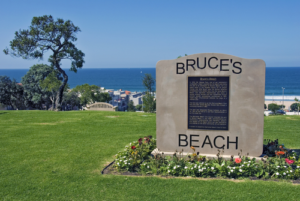 After months of litigation, Los Angeles County has decided to move forward with returning a portion of Manhattan Beach back to the rightful owners.

On Tuesday, the Board of Supervisors voted unanimously to return the land to the descendants of Willa and Charles Bruce once the state allows it, US News reports. The oceanfront property was purchased by the Bruce family in 1912 and turned it into the first West Coast resort for Black people at a time when most beaches were segregated.

The proposed plan, created by the county chief executive’s office, includes transferring the land, assessing the property’s worth, determining who the legal heirs are, and limiting any property tax burden on the living descendants, the Southern California News Group reported Wednesday.

More details around the land’s return to the Bruce descendants will be announced later this year.

“We are on an important road to set a precedent that could be replicated across the country as we work to put actions behind our commitment to an anti-racist agenda and anti-racist county,” Supervisor Holly Mitchell said. “We cannot achieve racial equity until we confront our past and make it right.”

Earlier this month, LA County released its action plan for giving the two parcels of oceanfront land in Manhattan Beach back to the living descendants of the Bruce family, Daily Breeze reports.

The two parcels of land were taken from the Bruce’s by the Manhattan Beach City Council through eminent domain and other properties. Much of the taken land became open green space and was eventually renamed Bruce’s Beach Park. The two parcels are now owned by Los Angeles County and have a lifeguard station on them.

“The steps outlined (in the plan) will take time and may require additional resources,” the report says. “Once completed, the workgroup will be in the best position to advise the Board (of Supervisors) fully of the financial and operational impacts, and likewise recommend to the Board the best way to move forward. It is anticipated that once a decision is made on how the County will proceed, implementation can occur.”

Sam Thayer on Foraging and Wild Edibles for Health and Conservation