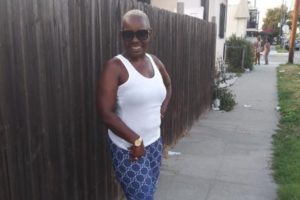 A mother of six in South Los Angeles was found inside of her home over the weekend bound, gagged with duct tape, and beaten to death.

The family of 53-year-old Fatima Johnson has been left grieving after the mother was discovered rolled up a blanket inside her home, Fox LA reports. They had been looking for her after she went missing for a few days, the family said. She didn’t show up at work and wasn’t responding to text messages.

“We hadn’t heard from my mother for over the last 48 hours,” Johnson’s daughter, Tyesha Harvey said. “My sisters and I contacted her best friend and we got her key, and my sisters found my mother inside her home… dead.”

Johnson was found inside her home by her daughter just after midnight Sunday, ABC7 reports. The family is asking police for help in identifying a suspect. Johnson’s boyfriend has reportedly been listed as a person of interest.

Her death comes just over a week ahead of what would have been Johnson’s 54th birthday. The family says the murderer stole Johnson’s silver Lexus, her jewelry, and cellphone.

“The scene that my sisters and I…witnessed first-hand and what happened to my mother is something that no child should ever see of their parent,” Harvey said.

The family believes Johnson’s boyfriend might be behind the fatal attack.

“He was just released from prison six months ago after completing a 25-year sentence for murder,” Harvey said. “We took it upon ourselves to start popping up on my mother and checking in on her to make sure she was all right because we didn’t feel comfortable with her relationship.”

The coroner’s office has yet to determine the cause of death but her daughter believes she was strangled.

“What happened to my mother is something that no child should ever see of their parent,” Harvey told the LA Times.

Johnson’s family described her as a “bubbly” and caring person who was studying to be a licensed vocational nurse at Westchester College of Nursing and Allied Health in Los Angeles. Johnson was halfway through her program while also working at a retirement home in South L.A.