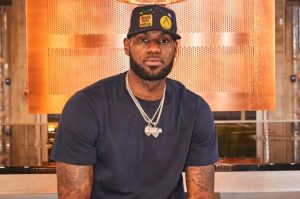 According to Forbes, Los Angeles Lakers’ centerpiece basketball player, LeBron James will likely claim the title of a billionaire by the end of the year.

The King, as he is referred to, is the NBA’s top-earning player for the seventh consecutive year, and that includes his off-court income, as the 2016-17 season was the only season of his professional basketball career, that James had the highest playing salary in the National Basketball Association.

The successful businessman is expected to earn $95.4 million. That includes an estimated $64 million from his endorsement deals,  memorabilia, and media. This will be a record level that no other NBA player has ever accomplished and the highest ever in American team sports. With the expected income, at the end of this year, his career earnings will be at $1 billion, including $700 million off the court. With that total, James joins an exclusive club that includes Tiger Woods, Floyd Mayweather, Cristiano Ronaldo, and Lionel Messi in reaching the three-comma club while still an active athlete.

With that peak amount of money being earned, James’ salary with the Los Angeles Lakers for the current 2020-21 season was set to place $39.2 million in his coffers, but James and every other NBA player will have 20% of their scheduled pay placed into an escrow account that will help balance the 50-50 split in leaguewide revenue. Amazingly, he stands to lose out on about $8 million. This will nullify his chance to enter the very exclusive club of athletes who have earned $100 million or more in a single calendar year. Woods and Mayweather are the only Americans to have done so as active athletes.

Rounding out the top five basketball players to make the highest amount of money this year are Golden State Warriors’ Stephen Curry with $74.4 million, former Curry teammate and current Brooklyn Nets’ player Kevin Durant will take home $65.2 million. Washington Wizards’ Russell Westbrook comes in at number 4 with $58.1 million as his former teammate James Harden, who is now on the same team with Durant will add $50 million to his fortune.

Durant, Westbrook, and Harden were once teammates on the same Oklahoma City Thunder team before that trio was broken up.