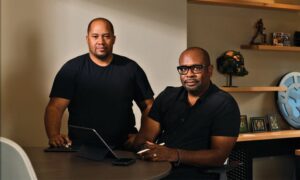 The collaborative effort makes Lion Forge Animation the official partner and producer of all animated content that will come from the minds of the hundreds of professional athletes who are within the APGS network.

According to Deadline, the arrangement between the two companies will be comprised of Alumni Pros Global Sports co-founder Robert Smith and Lion Forge Animation’s Head of Business Development Jimmy Thomas. The content produced will span long and short-form episodic series as well as features, shorts, and hybrid content.

“With Dear Basketball, Kobe Bryant demonstrated the power of animation and how a player’s legacy can live on beyond their playing days through their digital likeness,” stated Jerome Williams, founder of Alumni Pros Global Sports and retired NBA power forward. “Today, athletes and brands around the world recognize animation as the next frontier of name, image, and likeness. Our partnership with Lion Forge gives athletes, particularly minority athletes, the unlimited potential to explore new avenues of storytelling and expand their creative horizons through animation.”

Lion Forge Animation was the powerhouse behind the Oscar-winning short animation film Hair Love, which former pro athlete Matthew A. Cherry directed. They also produced the Andre the Giant graphic novel and MMA Fighter Rampage Jackson’s comic book. Lion Forge Animation is presently one of the few Black-owned animation studios in the world.

Alumni Pros Global Sports is a collective of professional athletes that looks to assist the athletes in managing their intellectual properties. Its group includes media network PlayersTV.

Lion Forge Animation founder David Steward II said: “The impact, influence, and star power of athletes is accelerating rapidly and will continue on this trajectory as NIL rules, NFTs, and new entertainment platforms expand creator economies fueled by content. APGS has been ahead of the curve in recognizing the value of athletes’ individual brands, their creations, and the connectivity to their fans.”