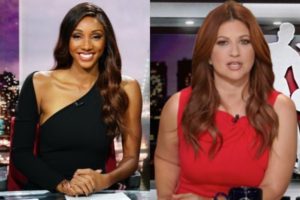 When they go low, we go high and Maria Taylor is doing just that.

The ESPN reporter has seemingly taken the high road while speaking for the first time amid the revelation of Rachel Nichols’ backhanded shade last season. Nichols has been under fire after recently leaked audio revealed her complaints about Taylor being chosen as the sideline reporter for the 2020 NBA Finals.

With last year’s Finals coming on the heels of a year of racial justice protests, Nichols assumed that Taylor was only given the gig so that ESPN could redeem their “CRAPPY LONGTIME RECORD ON DIVERSITY,” NY Times reports.

As a result of Nichols’ leaked audio scandal, she has been removed from sideline reporting the current NBA Finals and Taylor was given the job once again.

Now as the sports world readjusts amid the heightened speculation, Taylor took to Twitter on Wednesday to speak out for the first time.

During the dark times I always remember that I am in this position to open doors and light the path that others walk down. I’ve taken some punches but that just means I’m still in the fight. Remember to lift as you climb and always KEEP RISING ❤️ pic.twitter.com/ztSIx9CLpO

“During the dark times I always remember that I am in this position to open doors and light the path that others walk down,” Taylor captioned a tweet that included photos alongside other Black talents in sports. “I’ve taken some punches but that just means I’m still in the fight. Remember to lift as you climb and always KEEP RISING ❤️”

The leaked audio came from a private discussion Nichols had with LeBron James’s advisor, Adam Mendelsohn and his agent, Rich Paul where Nichols claimed she was a “victim of them trying to play catch-up” with diversity and inclusion.

Nichols returned to her hosting position on “The Jump” on Monday and offered an apology to Taylor and said how “grateful” she is to be a part of the ESPN team. Many have been calling for her removal from the network.

Meanwhile, Taylor is up for contract negotiations and it’s said that the host is seeking “Stephen A. Smith money,” around $8 million annually, NY Post reports. It’s more than the $5 million per year offer she reportedly turned down and much higher than the $1 million she’s currently making.