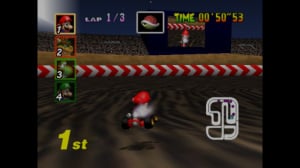 Taking a bunch of Mario characters and having them speed around race circuits using a range of special items to rush or smash past each other is something that has worked very well since the Mario Kart series began in 1992. The Mario Kart series are amongst the most enjoyable games on whatever platform they turn up on, and many people buying Nintendo hardware look forward to inevitable karting action. Wii U and Switch have the brilliant Mario Kart 8 (Deluxe), of course, but the series’ frantic four-player local multiplayer got its debut way back in Mario Kart 64.

This second title in the series was originally released for the Nintendo 64 (clue was in the title) and doubled the potential player count of the SNES original enabling splitscreen races and battles for you and up to three pals across various modes. 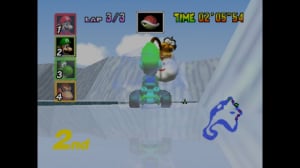 Mario Grand Prix is the main mode of play where you pick one of eight characters, then race the other seven in four cups, each featuring four three-lap races. Available to play alone or in two-player mode, the cups can be tackled at the usual 50, 100 or 150cc difficulties and a mirror mode can be unlocked, too.

Making use of the more powerful N64 hardware, there was an obvious graphical upgrade over the first game, with the SNES’ Mode 7 presentation ditched for a combination of polygons (the tracks) and pre-rendered sprites (the racers). There are more things to look at around the circuits and this is apparent from the first track with advertising boards and trees off to the side, an action-mirroring video screen and a drive through a tunnel with the light adjusting accordingly. Elsewhere in the game there are waterfalls, caves and a simple snow effect. Track edges and scenery at times looks very angular and the sprites of the racers look a little rough around the edges, but generally the bright, cartoony style works well and you’re usually zipping around too fast to pay much attention to the visual disparity between karter and circuit. 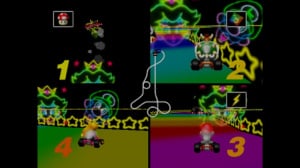 Audio-wise, there are some very effective sounds such as when you drive over a rickety bridge or the shattering of the ice that surrounds you after Lakitu has fished you out of freezing water. The music is typically catchy and upbeat, matching the locations well with Koopa Troopa Beach’s Carribbean flavour, or the more sinister sound of Bowser’s Castle.

The biggest change the switch to polygons provided was the addition of elevation to the tracks. The use of slopes, drops and uneven terrain opened up different racing possibilities from its predecessor. There’s the usual range of locations across the 16 tracks, with relatively traditional circuits alongside mountainous terrain and wintry stages. Weaving through vehicles on Toad’s Turnpike is particularly memorable, as is Choco Mountain where you have to look out for falling rocks, or Kalimari Desert where you contend with a train crossing the track at inopportune moments. Another highlight is Yoshi Valley, a course with multiple routes, plenty of places to fall off, and the positions of all characters hidden until they’ve finished the race. 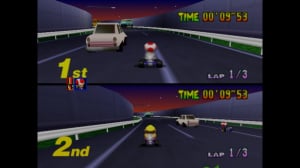 Including tracks from previous games is something of a Mario Kart tradition, but that would not start until the third game. Many of the tracks from Mario Kart 64 would return in subsequent titles, however, so even if this entry is new to you, you may find you’re familiar with some of the circuits.

Of course, this is a Mario Kart from a simpler time; a time when karts were karts and all you had to do was pick a character rather than faff about selecting tires. Characters have different top speeds and acceleration, of course — and the heavier you are, the better chance you have of muscling your way through the pack. The controls are as straightforward as you would expect and it’s worth remembering that a quick press of the brake after colliding with a banana skin will stop you spinning out. Hopping is used to slide around corners and it’s also possible to get a mini speed boost by waggling the stick left and right as you skid. It can take practice but it’s worth persevering with if you’re hoping to dominate the race. 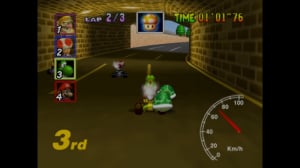 This is the game that introduced multiples of some items — a bunch of Bananas or triple Koopa Shells — and also debuted Fake Item Boxes, Golden Mushrooms and the infamous Blue Shell. Having battled through the field and put in some fantastic lap times, you can find yourself in first place only for someone to fire said projectile from the back of the pack before it tears through the field hitting you at the final corner and destroying your race. Some people feel it’s unfair whilst others think it adds to the excitement. This writer has no strong feelings on the matter, honest. He simply hopes that the person who came up with the idea was fired. Out of a cannon. Into shark-infested waters.

In a change from Super Mario Kart (that has stuck for subsequent releases) CPU controlled characters also collect special items, although they mainly seem to be given banana skins and fake item boxes. Aside from bumping into you (which admittedly can knock you towards danger) they don’t really attack, although their secret weapon is the rubber-banding that keeps them in your rearview mirror. Often you can send someone into a spin, take a series of corners without error, use a Super Mushroom and still find they’re right on your tail. 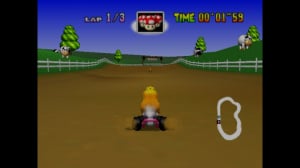 With everyone close together it’s a lot of fun to work your way up through the pack, weaving around some karts, fighting with others for a bit of track, narrowly avoiding a penguin and then taking someone out with a well-timed shell. The downside is that should you be in second place, midway through lap 2 with a Red Shell, there’s no reason to use it. You could take out the race leader, send them plummeting in to a pit and move up to first, but what’s the point when your rival will be back trying to pass you before the final lap has commenced? Best to save it, stick with them, and use it towards the end of the race.

For those seeking human competition, there are a number of multiplayer options available. The versus mode sees you race each other on any of the tracks. There are no CPU controlled racers, but bombs are scattered about that may wander into you. Alternatively there’s the Battle mode where you drive around one of four maps, collecting items to pop the balloons attached to your opponents. Should you be playing with three or four players, there’s a visual downgrade with some effects (and a paddle steamer) removed and there’s also a lack of music which can feel strange, but the chaotic battling provides a lot of enjoyment that greatly reduces any disappointment. 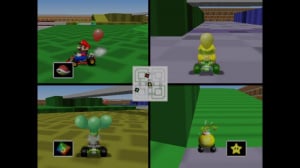 Then there’s the Time Trial mode. Trying to find the best point to slide around a corner — or where to use one of the Super Mushrooms you’re given — keeps you busy as you try desperately to improve your time by a small fraction. The original used a Controller Pak to save ghosts, a feature that hasn’t been replicated or emulated when the game has been re-released, so ghosts are limited unless you’re playing on originl hardware. Retry a track immediately after your first go and the ghost from your previous attempt will race around the track with you – although it disappears should you pause the game.

Mario Kart 64 offers the usual colourful frantic action, and although the rubberband AI can cause irritation, the racing remains entertaining. Time Trials will keep you busy after you’ve cleared the cups and then there’s the excellent multiplayer options, too. The loss of the music when playing with three or four players is disappointing but there’s plenty of enjoyment to be had from these modes. Mario Kart 64 has its faults and later entries would refine the systems introduced here, but there’s still plenty of fun here to keep you (and your friends) returning for more.