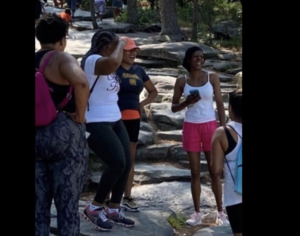 Bonnet manager and actress Mo’Nique put actions to words when she reportedly stopped a sister wearing the highly-debated head covering at a park on July 3.

According to Twitter user @desfrenchy, the outspoken comedienne approached a woman wearing a bonnet as Mo’Nique hiked at Stone Mountain in Georgia. The woman posted what appeared to be a text message that read, “My dad seen Mo’nique at Stone Mountain today, and she was talking to some girl with a bonnet on.”

She then captioned the screenshot of the image with, “Not Mo’nique checking girls in bonnets in real life.”

Not monique checking girls in bonnets in real life pic.twitter.com/gtc8vjjpcI

The Twitter user also posted another video with the caption, “And she asked her to do the bonnet dance, whatever that is.”

From the looks of the video, the interaction was pleasant. Mo’Nique laughed, took pictures and danced with the women.

The woman also claimed her sister, Jade, had “given her the tea.”

And she asked her to do the bonnet dance, whatever that is pic.twitter.com/qoMl62qw2H

Further down in the thread, Jade confirmed that Mo’Nique had the bonnet-wearing woman dancing a jig.

Yes! I got her tea she was making that girl dance! pic.twitter.com/MD5ruQSOL8

That didn’t stop Twitter users on the woman’s post from sounding off about Mo’Nique’s low-key obsession with respectability politics and minding other Black women’s business.

I like how Monique pretends to be nice and genuinely unfazed by the black women who choose to wear their bonnets or go out looking “crazy”..i just know she sneaked a pic to post on her IG lmao pic.twitter.com/rQYuBHrDBt

Monique when she seeing a bw with a bonnet minding her business pic.twitter.com/mzEgB2TOSd

The Bonnet Boss is at it yet again pic.twitter.com/3Q2WtskxOW

Monique when she says a black somehow enjoying life with a bonnet on pic.twitter.com/UGmxjutL8Z

Since May, Mo’Nique has seemingly been on a crusade to rally troops on her respectability train. She posted videos and even a photo of unsuspecting bonnet wearers in an effort to persuade Black women to “do better.”

Glad to see the interaction was fun for all.

Moving With A Dog – Dogster

The Original Nexomon Game Is Coming Soon To Nintendo Switch