Thatched beachfront bungalows overlook the Indian Ocean from this hotel named Kisawa Sanctuary in Mozambique, which was built in tandem with a marine conservation centre.

The Kisawa Sanctuary occupies 300 hectares of forest, dunes and beachfront on the southern tip of Benguerra Island, which lies 14 kilometres from the Mozambique mainland.

It is the first hospitality project created by entrepreneur Nina Flohr, whose studio NJF Design collaborated with skilled local weavers, thatchers and carpenters to realise the project.

Opened in November 2021, the hotel comprises 22 suites in 12 thatch-topped villas arranged within the dunes.

“Some lie on the calmer cove side, others shelter in the dunes on the ocean side, yet all are carefully positioned within their own secluded plot; providing maximum privacy and optimum appreciation of the natural environment,” said the hotel’s team.

Built without the use of heavy machinery, the wooden structures across the site are thatched and clad in a variety of styles based on the regional vernacular.

Guest bungalows are shaped like long villas and covered with wavy patterned roofs, echoing the form of waves.

Inside they have mottled plaster walls and wooden floors covered with large rugs. Colourfully printed textiles add warmth and variety to the neutral decor.

Woven-grass door panels slide across to open up bedrooms and bathrooms to living areas and the outdoors, allowing breezes to pass through.

Timber decking wraps around the bungalows, and forms paths to further terraces that support cabanas and surround swimming pools.

Locally made contemporary furnishings are mixed with crafts and artefacts from across Africa to lend an authentic feel to the interiors.

The communal dining spaces across the resort have a similar design treatment, and serve traditional cuisine made from fresh seafood and produce, with a zero-waste policy and using no processed ingredients.

A wellness centre hidden in the dunes is formed from clusters of thatched round volumes with conical tops.

Alongside the hotel, Flohr also launched the Bazaruto Center for Scientific Studies – a research hub for ocean conservation. 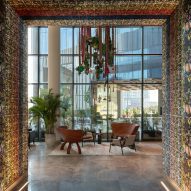 Minimalist hotel in Mozambique dominates at AHEAD MEA 2021 awards

Resort guests are able to participate in the research efforts through activities like excursions on the research vessel, which is used for tagging and monitoring local shark populations.

“The pairing of cultural celebration and environmental conservation at Kisawa presents a new, forward-looking narrative for both Mozambique and island escapes,” the team said

Located in the south-east of the African continent Mozambique is growing in popularity as a tourist destination. Sussurro, a series of private bungalows in the southern part of the country, took home three prizes at the AHEAD MEA 2021 awards.