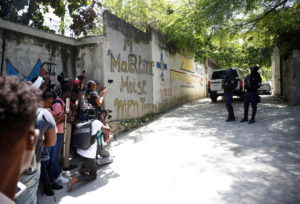 Reuters – Haiti’s police seized on Thursday at least two more suspected members of the gang of assassins that killed President Jovenel Moise, following a fierce battle that left bullets strewn in the streets of the capital.

Hundreds of residents clamored outside the police station where suspects were being held in Port-au-Prince, shouting “burn them” and setting fire to a vehicle they presumed was that of the assassins, according to footage streamed by Haitian media outlets.

Moise, 53, was shot dead early on Wednesday at his home by what officials said was a commando of trained killers, pitching the poorest country in the Americas deeper into chaos amidst political divisions, hunger and widespread gang violence.

Haiti’s police and army quickly tracked down and encircled the presumed assassins, who included foreign mercenaries, officials said in a briefing late on Wednesday.

On Thursday, one livestream showed a police van carrying away two weary-looking suspects, handcuffed together and guarded by balaclava-clad policemen wielding automatic rifles.

Another video shared on social media, that Reuters was unable to immediately verify, showed two suspects, one of whom was spattered with blood, tied up with rope and being corralled by a mob of angry citizens.

Officials have not given a motive for the killing so far. Since he took office in 2017, Moise had faced mass protests against his rule – first over corruption allegations and his management of the economy, then over his increasing grip on power.

Moise’s death has generated confusion about who is the legitimate leader of the country of 11 million people, which shares the island of Hispaniola with the Dominican Republic.

That does not bode well in a nation that has struggled to achieve stability since the fall of the Duvalier dynastic dictatorship in 1986, grappling with a series of coups and foreign interventions.

“I can picture a scenario under which there are issues regarding to whom the armed forces and national police are loyal, in the case there are rival claims to being placeholder president of the country,” said Ryan Berg, an analyst with the Center for Strategic & International Studies (CSIS).

Haiti’s 1987 constitution stipulates the head of the supreme court should take over. But amendments that are not unanimously recognized stipulate it be the prime minister, or, in the last year of a president’s mandate – like in the case of Moise – the parliament should elect a president.

Adding further complications: the head of the supreme court died last month due to COVID-19 amid a surge in infections in one of the few countries worldwide to have yet to start a vaccination campaign.

There is no sitting parliament as Haiti failed to hold legislative elections in late 2019 amid political unrest.

And Moise had just this week appointed a new prime minister, Ariel Henry, to take over from interim prime minister Claude Joseph, although he had yet to be sworn in when the president was killed.

Joseph appeared on Wednesday to take charge of the situation, running the government response to the assassination, appealing to foreign governments for support, and declaring a state of emergency.

Henry, however, told Haitian newspaper Le Nouvelliste that he did not consider Joseph the legitimate prime minister any more and he should revert to the role of foreign minister.

“I think we need to speak. Claude was supposed to stay in the government I was going to have,” Henry was quoted as saying.

The Dominican Republic said on Wednesday it was closing its border with Haiti and bolstering security amid fears of a breakdown in order in the country.

The United Nations Security Council is due to hold a closed-door meeting on the situation in Haiti on Thursday.

A U.N. peacekeeping mission – meant to restore order after a rebellion toppled then-President Jean-Bertrand Aristide in 2004 – ended in 2019 with the country still in disarray.

“There are many unknowns about what happens next,” said Jake Johnston, a senior research associate at the Center for Economic and Policy Research in Washington. “But it is important to remember that that was also the case before the assassination of Moise.”

Moise, backed by the international community, had been pushing to hold both elections and a constitutional referendum in September, efforts that were vehemently opposed by Haitian civil society, he pointed out.

Democrats To invest $25 Million In Voter Registration And Education