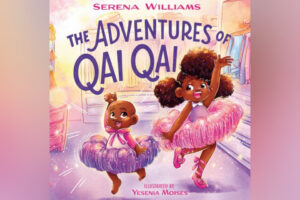 More than a decade after becoming a published author for the first time, Serena Williams has announced the forthcoming arrival of her first children’s book, The Adventures of Qai Qai.

Announcing the project exclusively to Good Morning America, Williams shared that she hopes the book will teach some important lessons to fans of her daughter Olympia‘s favorite doll, for which she created an Instagram account in 2018.

“People follow Qai Qai’s social media accounts for laughs and trending dance moves, but she represents something much deeper than that,” Williams explained. “Qai Qai has an infectious spirit and models a belief that anything is possible. This book reflects the lessons she teaches and embodies and we hope others can walk away inspired after reading ‘The Adventures with Qai Qai.’”

According to the Wall Street Journal, the book follows a character named Baby Girl as she prepares for a ballet recital. Sensing her anxiety, her doll Qai Qai comes to life and the two take off on “a magical journey that shows Baby Girl that she’s ready for the stage.”

‘The Adventures of Qai Qai,’ illustrated by Yesenia Moises, will be available on Sept. 27, 2022. The book is being published by Invisible Universe, the company behind the animated version of the Qai Qai doll, which can be purchased online.

Since being brought to life by Williams, Qai Qai has amassed over 350,000 Instagram followers. In 2021, technology from Invisible Universe has allowed the doll to “come to life,” recreating some of the most popular TikTok dance challenges.

Following Williams’ announcement, Qai Qai released her own video to share the news with her fans.

Prior to this foray into children’s books, Williams published her 2009 memoir On The Line in which she revealed some of the challenges she’d faced on and off the court along her journey to becoming the world’s top female tennis champ.

Sandra Bullock On Preparing Her Black Children To Face The World