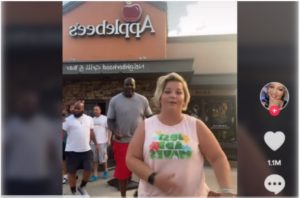 What do you do when you’re filming yourself for a TikTok video and an authentic Hall of Fame basketball player appears right behind you?

Well, an Applebee’s customer found out first-hand as TNT announcer Shaquille O’Neal made a brief appearance in her video as she was making it!

As TikToker Kelly M. Roesler, who labels herself a “?Self Proclaimed Comedian?” on her social media page, was recording herself in front of an Applebee’s in Florida, O’Neal just happened to exit the restaurant as Roesler started her dance to Walker Hayes’ “Fancy Like.”

The Blast reported that the NBA legend is currently in Florida touring around and performing at several parties under the moniker of DJ Diesel, who is his EDM (Electronic dance music) counterpart. O’Neal had just taken his crew to an Applebee’s restaurant near Tampa over the weekend when this video took place.

The basketball legend has just thrown his hat into the Hollywood game as it was recently announced that O’Neal will make his debut as a co-screenwriter and producer on the short film, HeadNoise, which is being produced through his company, Jersey Legends Productions.

According to Variety, the project examines the internal and external pressure to succeed. The story is told through childhood friends Rashaun and Damon, two talented basketball players from the same inner-city neighborhood.

“I’m so proud of HeadNoise,” O’Neal told Variety. “It is my first time writing and producing my own project. I wanted to call attention to what so many people encounter, especially young adults, who deal with anxiety and stress. It was such an honor to create this piece with such a diverse team of people. Everyone should see it.”

Random: Hey, The Switch Is Also Getting A Flight Simulator Game This Week