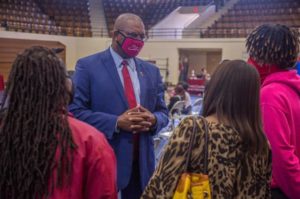 The purpose of the decision to clear $9.8 million for the HBCU students was rooted within providing financial “relief” to students who previously were unable to resume their college education at the university, mainly due COVID-19 pandemic financial hardships.

Conyers has been acting president of @SCSTATE1896 for less than 3 days and he’s already moved to forgive $9.8 million in student debt using only federal COVID funds. https://t.co/K7UXyqvCWf

“We are committed to providing these students with a clear path forward so they can continue their college education and graduate without the burden of financial debt caused by circumstances beyond their control,” Conyers said in the announcement. “Our university was founded on the tenet of providing students with access to a quality affordable education. That’s exactly what we intend to do. No student should have to sit home because they can’t afford to pay their past due debt after having experienced the financial devastation caused by a global pandemic.”

Even before the pandemic, “student loans have seen almost 157 percent in cumulative growth over the last 11 years,” the University of Washington reported in 2019.

“This is a tremendous weight I won’t have to carry,” Myers said. “I’m a first-generation college student, one of the only boys on my mom’s side of the family. I have to make it so I can provide for my family.”

Funds used to make debt cancellation possible came from “aid received from the federal government,” which included Cares Act and American Rescue Plan Act of 2021 funding, according to a press release.

How to Read a Credit Report to Find the Red Flags