From our article you will learn about the rules of the game of table tennis, what is required of the players and their “working tools”, as well as what parameters the inventory for playing ping-pong has. 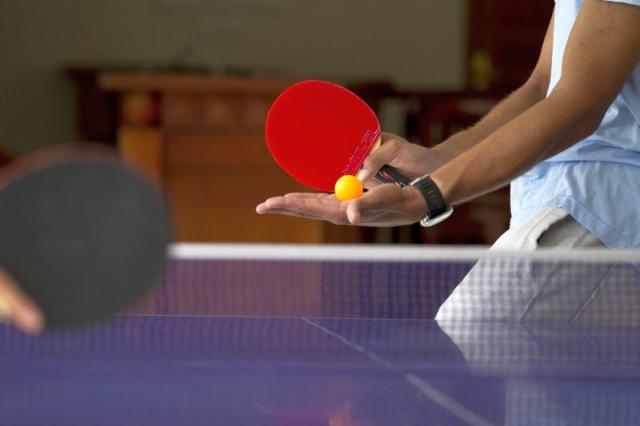 You may also want to play table tennis yourself or send your child to a sports school. It’s time to break the hegemony of Chinese athletes in the world of table tennis. In addition, practicing this sport is beneficial for health and improves physical fitness.

The basics of the basics

Table tennis is a dynamic sports game that helps develop reaction, concentration and physical activity. The winner is determined by the number of sets won.

To become the winner of the match, it is enough to win one set more than the opponent, for example, three sets out of five (this number is most common). Less often fights of seven and nine sets are played.

But even before the ball touches the racket for the first time in the match, it is necessary to determine which player (or which side – in doubles) will be destined to make this first contact. After the drawing of lots, the player in whose favor the coin fell (sometimes they guess the hand with the hidden object in it) has the right to choose between the following options:

But these are just the basics of the basics. The rest of this iceberg unfolds as you learn to play and dive deeper into the exciting world of table tennis.

From books to table

Familiarization with the rules is only the first step. It is foundational, but not the most basic for ping-pong. If you do not know how to control the ball and the racket, you will not be able to practice it.

The table tennis technique is very versatile. To achieve a professional level, an athlete must master a variety of defensive and offensive punches, as well as be able to diversify his serving style. But the first thing that any coach will surely teach is how to use the racquet grip when playing.

In the world of table tennis, it has long been believed that in Asia the racket is held only vertically, while European athletes prefer a horizontal grip. In the middle of the last century, territorial classification was abolished, as tennis players began to vary the grip without being tied to the continent.

The fundamental difference between these techniques is that with a horizontal grip, the racket handle is parallel to the floor plane. The vertical grip assumes a perpendicular relationship between the two planes. Nowadays, the manner of holding the racket does not give any advantage in the game. You need to choose a grip so that it is convenient to play.

But the ability to attack and defend will do a good job in the fight against rivals on the tennis table. If you master such types of punches as candlestick, stand, undercut (all are defensive elements), as well as smash, coasting – right and left – discount and, finally, top spin (and these are attacks for attacks), you will not it is a shame to defend the honor of the country in the international arena.

Table tennis rules put such an element as serving, almost “at the forefront”. The previous five innings in a row were replaced by only two attempts for the server. So each of them must be approached with great care.

Table tennis serves are made so that the point of contact of the ball with the pad of the racket is above the surface of the table and not below the level of the net. In addition, the first serving phase must not start below the level of the playing table. The opponent and the referee must see the whole process, therefore it is forbidden to toss the ball “from under the table”, as well as to cover it in any way.

Concentrate before throwing the ball. As soon as the round projectile leaves the palm and flies upward, it will be considered entered into the game. And if he is caught again or dropped on the floor without touching the racket, the opponent will receive a point, since a mistake was made when serving.

A point does not always start on the first try. If the ball touches the upper edge of the net, while flying over to the opponent’s side, a re-serve is awarded. Their number is not limited by table tennis rules. In professional sports, re-serve “streaks” are rare. Reverse curious episodes of history are unknown.

Correct play with the correct parameters

No sports game can be played without appropriate play equipment. In table tennis, the minimum set includes a table, net, rackets and a ball.

Professional table tennis tables are 2.74 m long, 152.5 cm wide, and no more than 76 cm high from the level of the plane on which they are installed. Table tennis table dimensions are officially stated in the rules of the game. 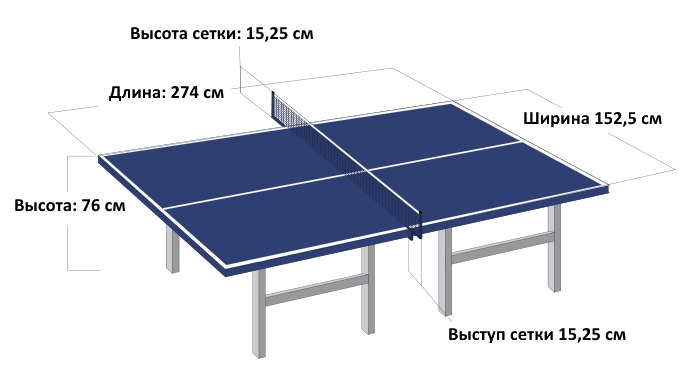 The table can be in two halves or a monolithic structure. The playing surface must be perfectly flat and smooth. The table layout has an outer line running along the perimeter, 2 cm thick and a middle line (for doubles) only 0.3 cm thick.Above the middle transverse line of the table, a special net for table tennis is stretched 1.83 m long and 15.25 cm high …

Table tennis rackets are chosen depending on the physiological characteristics and manner of play. Rackets can be of any size, shape and weight, but the base must be firm and flat. The most popular racket sizes are: length 26 – 30 cm, width 15 – 17 cm, weight 160 – 200 g. The playing part is called a mirror. According to the rules of the competition, the padding on the racket must be of different colors. It is necessary to take care of the racket: protect it from mechanical damage, store it away from sunlight (best of all in a case) and from time to time wipe the pad with a cotton swab moistened with water.

The thickness of the handle and its length depend on the structure of the hand, and the weight is chosen based on the degree of comfort. If you are more defensive, you need to use a rubber that provides a weaker rebound. For attacking players, the bounce of the ball from the racket should be provided stronger.

According to the rules of the International Table Tennis Federation (ITTF), the base of the racket must be at least 85% wood. In competitions, certain types of pimples (mostly long) are prohibited, with the help of which the player can ignore the rotation of the opponent’s ball.

You need to play table tennis with round orange or white balls with a diameter of 40 mm and a weight of only 2.5 grams. They are graded for quality and are designated with stars ranging from 1 to 3. The most reliable table tennis balls are made in Japan and can cost around $ 2 apiece.

Where to play table tennis depends on your imagination. In your case, this could be a nearby school gym, an outdoor sports ground, or even an ordinary apartment. Quite often, a ping-pong table is placed in the corridors of firms and enterprises so that employees can relax and play during breaks. Clothing is also an individual choice. The pros play in T-shirts, shorts and lightweight sneakers. You can wear any comfortable clothes and shoes. The main thing is that the lighting and climate are acceptable.

How to choose a bike: technical details