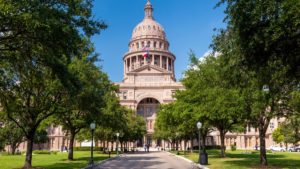 After their first attempt failed, Texas Republicans are again trying to pass an election restriction bill through the state prompting Democrats to flee the state to block it.

At least 58 Democratic Representatives are expected to flee Austin Monday in an effort to block measures from advancing according to NBC News. The move, which was also conducted in 2003, will stop political  business in the state until the lawmakers return or the session ends.

Texas lawmakers plan to travel to Washington D.C. and stay there for at least three weeks and begin advocating for federal voting such as the For The People Act, also known as H.R. 1. Last month, Texas Democrats staged a walkout to stop Republicans from passing the bill.

ON BOARD: Texas Democrats on their way to D.C., where they plan to stay for more than three weeks to deny the state House a quorum pic.twitter.com/hTE0mfxveZ

“Our democracy is on the line,” state Rep. Trey Martinez Fischer told NBC News. “It became very clear to us that this weekend that any attempts to negotiate some Democratic concessions were cut off, making it very clear that Republicans were hellbent on having it their way.”

State Republicans have the blasted move, saying Democrats are abandoning their state and are refusing to do their jobs. Governor Greg Abbott, who is sure to sign the election restriction bill, called the move a dereliction of duty.

“Texas Democrats’ decision to break a quorum of the Texas Legislature and abandon the Texas State Capitol inflicts harm on the very Texans who elected them to serve,” a statement from Abbott said according to NPR. “As they fly across the country on cushy private planes, they leave undone issues that can help their districts and our state.”

However, unlike when Texas Republican Ted Cruz abandoned the state during a winter storm earlier this year, politicians are applauding the move.

One of their biggest supporters is Vice President Kamala Harris who said “fighting for the right to vote is as American as apple pie,” during a voting rights discussion she attended in Detroit.

“I applaud them standing for the rights of all Americans and all Texans to express their voice through their vote, unencumbered,” Harris said. “They are leaders who are marching in the path that so many others before did, when they fought and many died for our right to vote.”

The lawmakers are facing jail time by fleeing the state. According to Texas’ Constitution, the legislature requires a quorum, of at least two-thirds of state lawmakers to be present to conduct state business in either chamber. Absent lawmakers can legally be required to return to the state and state Republicans will likely task the Department of Public Safety to track the lawmakers down.

Minecraft Gets Some More Sonic Content In Awesome New Event