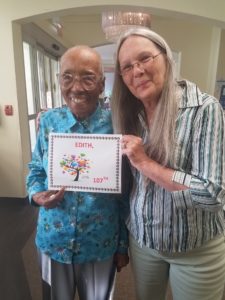 Edith Renfrow Smith—who turned 107 on July 14—is an undeniable trailblazer who refused to let adversity crush her dreams.

Smith was the first Black woman to graduate from Grinnell College in Iowa and was honored on campus with a dedication of the school’s Edith Renfrow Smith Black Women’s Library.

According to Grinnell College, the school also has the Smith Gallery, where “student art exhibits” are showcased. And if the educational institution has not previously landed on your radar, musician Herbie Hancock is another noted Grinnell College product who also has personal ties to Smith’s family.

Happy 107th birthday to Edith Renfro Smith. An influence to all who met her, Edith lived across the street from the Hancock family in Chicago and it was she, an alumnus of @GrinnellCollege, who first influenced Herbie’s decision to attend school there. https://t.co/hFg7SgaC56

As a retired teacher in Chicago, Smith’s legacy is equally noteworthy, especially considering the challenges she endured.

Although “Edith’s grandfather, George Craig, was an escaped slave who later settled in Grinnell and worked as a barber,” education was a top priority in her parent’s household, according to Grinnell College’s report. All of Lee and Eva Renfrow’s six offspring attended college. Smith turned out to be “the first African American woman to graduate from Grinnell, with a major in psychology and minor in economics and history,” as stated in Grinnell College’s article.

Smith’s four-year presence at the college left her standing out as “the only Black student at Grinnell of either gender,” according to the Chicago Sun-Times. Upon graduating, securing employment was her next goal.

“They sent 12 students from Grinnell to see about getting a job,” she said in the interview. “In ’37, there were no jobs. Every one of us got a job; I got a job at the YWCA, which was at 4559 South Park, $75 a month. It was a good place; I took dictation from Professor Thurmond.”

Working for Chicago’s first Black alderman, Oscar DePriest, and becoming employed by the University of Chicago were among Smith’s other job stops, per the Chicago Sun-Times.

Smith developed tough skin early in life. Finding African American families who were located in Grinnell was rare when Renfrow Smith was growing up. According to Grinnell College’s interview, discrimination was pervasive, but Smith’s mother instilled important beliefs in her children.

Renfrow Smith’s grandparents were born in slavery, Chicago Sun-Times reported. But clearly, obstacles did not stop Smith. She went far while choosing to move past them.