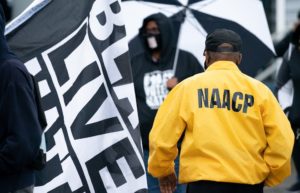 The NAACP announced it plans to pay the bail for Texas Democrats who fled to Washington D.C. to block an election restrictions bill Republicans in the state is attempting to pass.

“War has been declared on democracy, and we will support anyone who stands up to defend it,” Derrick Johnson, president of the NAACP, said in a statement shared with The Hill. “We are fully invested in good trouble.”

“War has been declared on democracy, and we will support anyone who stands up to defend it,” President @DerrickNAACP#FightingForward pic.twitter.com/cmJKTTpShq

The lawmakers have headed to Washington D.C. to pressure Congress to pass H.R. 1, the For the People Act and have called on Republicans in the state to compromise on a bill overhauling the state’s election procedures. Texas Governor Greg Abbot said the lawmakers would be arrested upon their return.

“They’re quitters,” Abbott told Fox News. “That is not the way Texans do things.”

Vice President Kamala Harris welcomed the Texas lawmakers to Washington D.C. complementing them on their “courage and the commitment and the patriotism.”

“I know what you have done comes with great sacrifice, both personal and political. And you are doing this in support and in defense of some of our nation’s highest ideals,” Harris said.

At least 18 states have enacted voting restrictions with more on the way. Many passed the laws due to Republicans losing the 2020 election and former President Trump’s election lies and failed lawsuits. President Joe Biden recently met with civil rights leaders and organizations including Johnson to calm growing concerns that the Biden Administration isn’t doing enough to protect voting rights.

This is the second attempt Texas Democrats have tried to keep their opposition from passing the voting restrictions bill. In May, House Democrats walked out in protest as a midnight deadline on the deal approached.