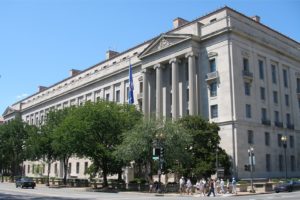 Reuters – Ian Benjamin Rogers and Jarrod Copeland have been indicted on charges they conspired to attack the Democratic Party headquarters in Sacramento, the U.S. Justice Department (DoJ) said on Friday.

According to the unsealed indictment, Rogers, 45, and Copeland, 37, started plotting to attack Democratic targets after the 2020 presidential election. They also tried to get support from an anti-government group to further the cause.

The indictment does not name the militia group they contacted.

However, in a different court filing, DoJ prosecutors said that Copeland emailed the far-right group Proud Boys in an effort to “recruit others to join the plot,” and also was a member of a militia group affiliated with the Three Percenters

Both the Proud Boys and the Three Percenters have come under DoJ and government scrutiny recently, after some of their members were indicted in connection with the Jan. 6 attack on the U.S. Capitol by former President Donald Trump’s supporters.

In numerous messages they exchanged, the two discussed blowing up buildings, the DoJ said.

In one exchange in January 2021, for instance, Rogers told Copeland: “I want to blow up a democrat building bad.”

DoJ and Federal agents executed a search warrant on Jan. 15 at Rogers’ home and seized a stockpile of weapons including 45 to 50 firearms, thousands of rounds of ammunition and five pipe bombs.

Prosecutors say Copeland tried to destroy evidence during the investigation and communicated with the leader of a militia group who told him to switch communication platforms and delete the evidence.

Rogers was arrested on the day the search warrant was executed and remains in the custody of the state. Copeland was arrested on Thursday and will appear for a detention hearing on July 20, according to the DoJ

In the detention memo, prosecutors said Copeland joined the U.S. military in December 2013, but was arrested for desertion in May 2014. He received an “other than honorable discharge” in lieu of being court-martialed.

The memo says Copeland and Rogers were infuriated after President Joe Biden won the 2020 presidential election, and they “understood they would be viewed as domestic terrorists” if they carried out their vision to overturn the U.S. government.

Their plot allegedly began on Nov. 25, 2020, as Rogers told Copeland in an encrypted messaging application: “Ok bro we need to hit the enemy in the mouth.”

Initially, it says, they discussed attacking the California governor’s mansion, though the plan later evolved and the Democratic headquarters in California became the target. Other possible targets they discussed included the corporate offices for Twitter and Facebook.

The indictment does not allege that Rogers or Copeland had any involvement in the Jan. 6 attack at the Capitol.

The FBI is still searching for an unknown suspect who planted explosive devices near the Democratic and Republican committee headquarters on Jan. 5.