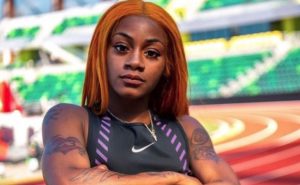 On Friday (July 9), the U.S. Anti-Doping Agency (USADA) released a response letter to Congresswoman Ocasio-Cortez and Congressman Raskin addressing Sha’Carri Richardson’s suspension from the Tokyo Olympics and the marijuana rules for athletes. The star athlete received a 30-day suspension after testing positive for THC, an active ingredient in marijuana.

“The United States Anti-Doping Agency (USADA) agrees that Ms. Richardson’s exclusion from the Tokyo Olympic Games is a heartbreaking situation and that the World Anti-Doping Agency’s (WADA) rules concerning marijuana must change,” the USADA leaders wrote in the letter.

“Ms. Richardson’s one-month suspension was the absolute minimum sanction that USADA was permitted to impose under the Code,” the letter continues. “Anything less would have resulted in USADA being non-compliant with the WADA Code.”

According to the July 2 news release, Richardson’s victory at Olympic trials was nullified due to her anti-doping rule violation.

“Richardson’s competitive results obtained on June 19, 2021, including her Olympic qualifying results at the Team Trials, have been disqualified, and she forfeits any medals, points, and prizes,” said U.S. Anti-Doping Agency CEO Travis T. Tygart in a statement. “Beyond the one-month sanction, athlete eligibility for the Tokyo Games is determined by the USOPC and/or USA Track & Field eligibility rules.”

The controversial suspension fueled an intense debate on social media. Richardson appeared on the “Today” show to share what happened and take responsibility for her actions. She discussed using marijuana as a coping mechanism after learning about her mother’s death.

“It sent me into a state of emotional panic,” Richardson told journalist Savannah Guthrie. “I didn’t know how to control my emotions or deal with my emotions during that time.”

MoveOn Civic Action,  a progressive lobbying group, decided to step in and support Richardson. The organization launched a petition to reinstate Sha’Carri Richardson for the Tokyo Olympics. Within a week, the petition amassed more than 500,000 signatures.

“In no world is marijuana a performance-enhancing drug for runners,” the petition read. “And in more places in the United States and around the world, marijuana use is legal. The United States Anti-Doping Agency should drop their penalty and allow Richardson to compete!”

Richardson’s ban caught the attention of New York Rep. Alexandria Ocasio-Cortez. She teamed up with other Congressional members to request that the International Olympic Committee (IOC) reconsider Sha’Carri Richardson’s ban.

“This punishment, which is not supported by any specific evidence, may prevent Ms. Richardson from competing in the 2021 Tokyo Olympics just after she inspired the country with her performance in the Olympic Trials last month,” the lawmakers wrote in a letter.

Last month, Richardson clocked an incredible 10.86 seconds during the women’ s 100-meter dash, making her mark as one of the fastest women in the country.

“We urge you to reconsider the policies that led to this and other suspensions for recreational marijuana use, and to reconsider Ms. Richardson’s suspension,” the letter from the Congressional leaders continued. “Please strike a blow for civil liberties and civil rights by reversing this course you are on.”

We worked with @RepRaskin and the Subcommittee on Civil Rights & Civil Liberties to formally ask @USAntiDoping to end Sha’Carri Richardson’s suspension.

The USADA’s response letter to Congressional members confirms that the organization seeks to reduce consequences and risks through education. However, the organization states its inability to change the rules governing marijuana among athletes and will better advocate for rule changes to better address situations like Richardson’s.