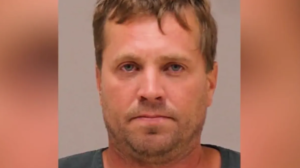 A Black man says he’s lucky to be alive after being a victim of a racist attack that took place at a hotel swimming pool.

Jackie Beard Jr. was at the Staybridge Suites pool in Grand Rapids, Michigan, with his family when they were joined by a man identified as Joel Venema, WOOD-TV reports. Beard noted Venema’s rowdy behavior as soon as he entered the pool.

“Most disturbing thing I have seen in my whole life,” Beard said. “He slammed his kids in the pool and I was like, OK, they are going to be on the wild side.”

He says Venema’s behavior only got worse and Beard wanted the man to stay away from his family.

“I was like, whoa. I stepped in there and was like, ‘Could you please take this away from my kids,’” Beard said. But that’s when Venema launched an attack against Beard and began hurling racial slurs at him.

“He’s like, ‘F you, N-word, F you, N-word. I’m going to kill you, N-word,’” Beard said of the attack. After trying to walk away to deescalate the situation, that’s when Venema jumped on Beard’s back and put him in a chokehold.

Venema, who was “obviously intoxicated” according to police records, jumped on Beard twice in front of his three kids. “I have never heard my baby cry like that. Even she knew in her innocent infant self that something was wrong,” Beard’s fiancée Lauren Summerfield said.

Beard said it’s not the first time he’s been the target of racial slurs, but Venema took his attack to new heights.

“I’ve had someone calling me the N-word — that’s something small to a giant. But physically putting their hands on me, telling me they are going to die and me kind of blacking out” was something new, Beard said.

Court documents say while in police custody, Venema continued to use racial slurs toward a Grand Rapids police officer and another arrestee who was Black. Venema was the second Grand Rapids resident who was charged with ethnic intimidation charges within a one-week period.