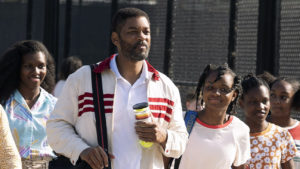 Can a man who portrayed the Greatest of All Time be solid enough to play the father of two of the greatest athletes of all time?

Well, we are about to find out as the former rapper, Fresh Prince, who we now know as box office smash Will Smith is set to play the lead character in the upcoming Warner Bros. film, “King Richard.” King Richard is Richard Williams, the father of tennis phenoms Venus and Serena Williams.

Warner Bros. has just released a new trailer for the upcoming film “King Richard.” The just-released trailer showcases Philadelphia icon, Smith, as he assumes the role of Williams with acting precision.

“All my life I’ve been waiting for this…a Williams is going to win.” Will Smith is #KingRichard in the inspiring true story of the coach/mentor/father that brought us Venus & Serena Williams. In Theaters and streaming exclusively on @hbomax November 19. pic.twitter.com/2qfRu3e21q

The film is executive produced by Venus and Serena and their other sister, Isha Price. The film showcases the incredible and unprecedented journey that the tennis professionals embarked on from the famed Compton, California neighborhood (Where previous Compton heroes, controversial hip-hop group N.W.A., The Game, and Kendrick Lamar hail from) to the top of the professional tennis world. The strength and struggles that they learned from the heart, soul, and passion they received from their father, Richard, who was their coach, rock, and reason for their unparalleled success.

Smith posted the trailer of the film on his Instagram account, along with some words about the film.

“One of the greatest honors as an actor is to be able to celebrate someone’s legacy while they’re still here creating it. I’ve gotten to do it a few times in my career playing @ceoofhappyness and @muhammadali, and every time it’s a fulfilling and expansive experience beyond compare.

“So now, I’m proud to show you all our first trailer for #KingRichard, the story of the man who introduced the world to @venuswilliams and @serenawilliams. The origin story for some REAL DEAL superheroes!!”