Architecture studio Wutopia Lab has created a cloud-shaped pavilion called the Shrine of Everyman on a shallow pool designed to look like melted chocolate near Shanghai, China.

Described as a “sacred space for ordinary people”, the 35-square-metre resting spot replaces an old roadside pumping station on the Dongtanya Quad Shan Farm, which is owned by food and beverage multinational Bright Food.

Exploring the idea of what constitutes a sacred space and a feeling of shared memory, Shanghai-based Wutopia Lab drew on the history of food production on the site, in which chocolate has played an important role.

“One of the key charms of traditional Chinese culture is that everyday places can be elevated into sacred spaces through the construction of shared memories,” explained Wutopia Lab founder Yu Ting.

“Milk chocolate, reinvented by Shanghai’s food industry (including the predecessor of Bright Food) during a time of material scarcity, was a boon to the Chinese people of that period, and was once an integral part of Shanghai’s culinary memory.”

The Shrine of Everyman’s shallow, semi-circular pool, designed to look like a pool of melted chocolate, cantilevers out towards a river that runs alongside the roadside site.

A thin walkway leads across the pool into the gabled form of the pavilion, which has been created by thirteen layers of polycarbonate screens supported by a steel frame structure and topped by a steel-sheet roof.

The translucent white of these plastic screens was chosen to symbolise milk, and they have been cut through by a series of cloud-shaped openings that frame views out across the farmland. 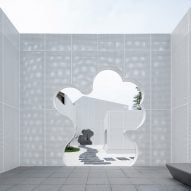 “Using my daughter’s favourite motif, the cloud, as a symbol, the layers of polycarbonate panels form jagged doorways and overlapping silhouettes to rewrite the flat experience of the landscape,” described Ting.

Both the edge of the pool and the interior of the Shrine of Everyman are illuminated at night, giving it an ethereal quality and signalling the pavilion’s location across the landscape.

“[The pool] allows the pavilion to be visually prominent in the surrounding landscape by achieving a floating effect, both from the perspective of the road and from the water surface,” said Ting.

“Inside, you can look into the distance and see a beautiful earthly landscape that was reclaimed by countless ordinary people…you know that everyday miracles are actually done by ordinary people.”

Cloud-like forms have been incorporated in several of Wutopia Lab’s projects, including a bookshop in Taizhou designed in collaboration with Office ZHU, and a cafe for children in Dalian.

The photography is by CreatAR Images.