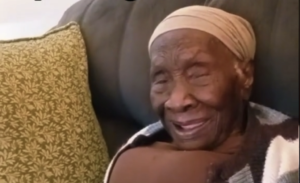 A 103-year-old grandmother has become a viral sensation after recalling her experience with picking cotton for little to no wages.

TikTok user Shanika Bradshaw filmed her grandmother, Madie Scott sharing her experience of picking cotton when she was a teenager, Buzzfeed reports. The three-minute video details Grandma Madie explaining how she and others worked from 3 am to 5 pm each day to make a living for themselves in a post-slavery America.

“You gotta know how to work to do it,” the lively senior told her granddaughter.

@blackbeauty_305Grandma picked cotton from 3am-5pm every day.. She was paid barely anything. Smh! #storytime♬ original sound – Denise B

She used her hands to demonstrate the rows of cotton she would have to work through each day. She recalled how the buds in the cotton often felt like thorns and were painful to work through.

“Grandma picked cotton from 3am-5pm every day.. She was paid barely anything. Smh!,” Bradshaw captioned the now-viral video. When asking her grandmother how much she was paid for her hard work, Grandma Madie said it was just a few cents and nothing if you produced no cotton.

“How much they was paying you?” Bradshaw asked. “Nothin’,” her grandmother responded.

When asked what the cotton was used for, Grandma Madie boldly replied, “[To] make cotton clothes. What you think they did with it?”

In an interview, Scott said she started “working in the fields” when she was just 12 in her native Georgia. She relocated to Miami at the age of 16 and started working as a sharecropper. Her sister later joined her at work.

“That’s all there was to do,” Scott told BuzzFeed. “You can work in the house [babysitting or cleaning], but if you work in the field you make the most money.”

She went on to start working as a cook in Miami Beach before taking on work as a nanny for a wealthy family. She worked for the family for 40 years and raised their seven kids while also raising her own.

“We hear about Christopher Columbus, but we don’t really hear too much of Black history,” Bradshaw said. “So I feel it’s important for me to put this out there so people can hear it firsthand.”

Grandma Madie retired in the 1980s when she was in her 80s. Her granddaughter felt sorry for her grandmother after learning about the poor work conditions and treatment she received for her hard work.

“Today was the first day that I felt a little sad,” Bradshaw said. “I was asking her about the pay. I asked her if she forgave the people for how she was treated and she said, ‘Yeah, I did forgive them a long time ago. Even though I was overworked and put in so much work and was paid so little.’”

The path to crypto adoption