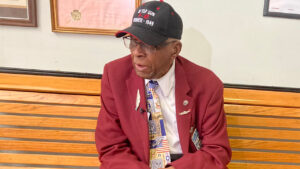 A Tuskegee Airman received a hero’s welcome in his Pennsylvania hometown for his achievements as a serviceman.

According to Atlanta Black Star, 98-year-old retired Lt. Col. James Harvey III was honored by his hometown high school for his many achievements and contributions. The ceremony took place at his alma mater, Fairview High School in Mountain Top, Pennsylvania, in the Crestwood School district. Before Harvey graduated back in 1942, he was the valedictorian and class president.

“The three people that we’re honoring have gone on to really accomplish some great things, nationally and internationally. For our students to see that and to know that they too were in this same position I’m in right now is meaningful,” said Robert F. Mehalick, superintendent in a report by WNEP.

The 98-year-old former pilot is one of the last living members of the esteemed Black military squadron and a fighter pilot with the 332nd Fighter Group’s 99th Fighter Squadron. He made history when he became the first Black United States Air Force jet fighter combat pilot to fight in the Korean War.

Harvey was drafted into the Army in April 1943 and enlisted with the Army Air Corp of Engineers but then decided that it wasn’t quite the right fit for him. He took that opportunity and applied for cadet training, and became the only Black soldier to move on to pilot school. He then went on to train at the Tuskegee Army Air Field.

Harvey became one of three pilots to compete in the inaugural U.S. Air Force Weapons Meet at Nellis Air Force Base in 1949. His unit finished on top as they placed first in the competition.

Harvey earned 11 air medals, including the Distinguished Flying Cross, retired from the military in 1965 as a lieutenant colonel after 22 years of service, and currently lives in Denver.