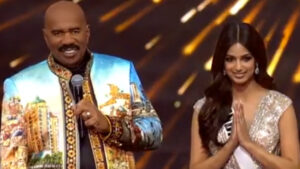 Survey says Family Feud host Steve Harvey had yet another jaw-dropping moment when he popped a peculiar question while hosting the Miss Universe pageant that got the internet buzzing.

Over the weekend, Harvey drew attention away from this year’s Miss Universe winner, Miss India Harnaaz Sandhu. As customary at the pageant, the host asks contestants a question based on achievement, talent, or something they would like to do in the future. People were shocked when, according to Insider, Harvey said to Sandhu, “I hear you do some pretty good animal impersonations. Let’s hear your best one.”

The contestant was shocked: “Oh, my God, Steve, I was not expecting to do this on the world stage. I have to do this, I have no other option.” After stating her love of cats, she told the audience, “Brace yourself everyone” as she gave Harvey what he asked.

Not only did Harvey make Sandhu do an animal impersonation, according to TVInsider, he stumbled after announcing Miss South Africa as the second runner-up. The two contestants remaining were from Paraguay and India. As he started to announce the runner-up, he blurted out, “Congratulations, Portugal,” but then stopped and stated to the audience, “They wrote Portugal on the damn sign, trying to play me… they’re trying to get me again. But I’m not going for it this year. “Congratulations, Paraguay. They had Portugal on the damn sign. I looked dead at it. Y’all saw it. Don’t try to blame this on me this year.”

At the 2015 pageant, Harvey mistakenly announced Miss Colombia as the first runner-up over the actual winner Miss Philippines before having to bring her back and admit that it was a mistake and she hadn’t won.

He also caught slack by making another error at the 2019 pageant when he mistakenly referenced Miss Malaysia as Miss Philippines.