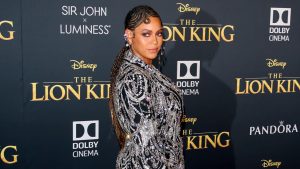 Beyoncé is celebrating the ‘Black is King’ anniversary with the release of two music videos. On Saturday, July 31, the music icon dropped “Mood 4 Eva,” featuring her husband Jay-Z. She also released “OTHERSIDE”.

“A year later and the impact is still a mood 4 eva,” a fan commented under the Mood 4 Eva video. “That’s what the Black culture is… impactful in every aspect of the word.”

The Release of Black is King

Black is King was released on Disney+ on July 31, 2020. The visual album and musical film was written, directed, and executive produced by Beyoncé. It was designed to be a companion piece to The Lion King, celebrating the “breadth and beauty of Black ancestry”, she wrote in an Instagram post.

“The events of 2020 have made the film’s vision and message even more relevant, as people across the world embark on a historic journey,” Beyoncé wrote. “We are all in search of safety and light. Many of us want change. I believe that when Black people tell our own stories, we can shift the axis of the world and tell our REAL history of generational wealth and richness of soul that are not told in our history books.”

A Journey of Discovery

Black is King highlights the journey of a young prince as he transitions into adulthood. The visual album reimagines the lessons of “The Lion King” in human form. It walks through the trials and tribulations that come on the path to discovery and gives today’s generation of kings and queens a sense of identity on their path.

“With this visual album, I wanted to present elements of Black history and African tradition, with a modern twist and a universal message, and what it truly means to find your self-identity and build a legacy,” Beyoncé said.

The success of Black is King led to Beyoncé’s historical Grammy wins at the 63rd annual awards ceremony this year. Beyonce’s Grammy collection spiked to 28 after she received an award for best R&B performance for “Black Parade”.

“As an artist, I believe it’s my job and all of our jobs to reflect the times and it’s been such a difficult time,” Beyoncé said during her acceptance speech in March. “So I wanted to uplift, encourage and celebrate all of the beautiful Black queens and kings that continue to inspire me and inspire the whole world.”

in search of their path.

The two videos are approximately seven minutes each. The videos feature other artists and blotches of cheetah print throughout the entire video. The eye-catching visuals and cinematic shots capture Beyoncé’s creative genius.

“I am Beyonce, Giselle Knowles-Carter. I am the Nala – Sister of Naruba….I sold my whole chain. I be like soul food. I am a whole mood”

What’s Really Important: 3 Things I Realized When I Lost My Grandmother