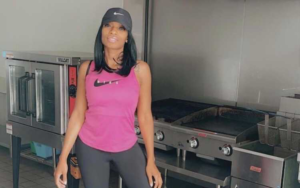 This Black woman is taking healthy meals to the next level with her new cookbook and meal prepping service turned soon-to-be restaurant.

Last November, Anne Onyeneho authored a plant-based cookbook called “PlantBaed” to help people prepare their own healthy dishes at home. She followed up with a meal prepping service in March named after the cookbook.

“People are more conscious of how they eat,” Onyeneho told Insider. “It’s interesting how many people hit me up about food, on how to prepare things and what they need to do. You would think I was a doctor.”

Onyeneho plans to open her first restaurant next year, and based on projections, she’s likely to do well.

She’s projected to net over six figures by November, according to documents seen by Insider. Since June, she’s seen a 400% increase in sales for meal preps and a 200% increase in cookbook sales month-over-month since last November.

When she first opened presales for her cookbook, it sold $10,000 worth of copies in three days.

The chef’s company has spread mostly by word of mouth. Her “PlantBaed” Instagram account has over 45,000 followers. She’s set to co-host a YouTube cooking show with actress Crystal Hayslett.

Onyeneho’s success has come with hard work and dedication.

After self-publishing her own, the chef said she could “write a book on how to write a cookbook.” She said she had to study copyright and trademark laws, put together a manuscript, and find the right editors to help her.

“I had to use my personal money and my savings and bet on myself,” Onyeneho said.

She plans to keep “PlantBaed” in the family with all of her success to help build generational wealth. Her team currently consists of four people.

“Eventually, I’m going to need to grow,” she said. “But sticking with the family is the best way to avoid a labor shortage.”

Her advice to business owners? Now is the best time to start a business, but do it wisely.

“All entrepreneurs should first research and understand their targeted customer needs before executing any business idea.”

Black-owned Businesses Are Doing Better Than Before The Pandemic