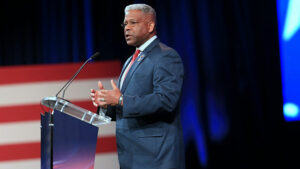 The wife of Texas Republican gubernatorial candidate Allen West was arrested Friday night for driving while intoxicated, according to the Dallas Police Department and West, who is disputing the charge.

According to The Texas Tribune, Angela Graham-West, 61, was driving home from dinner with her grandson when she was pulled over and arrested. Graham-West was later charged with driving while intoxicated with a child under 15 years old.

West, who previously served as the head of the state’s Republican Party, was in Waco at a dinner before returning to Dallas and finding out about his wife’s arrest. In a video West posted on Instagram Saturday morning, he said he spoke with a few people who were at the dinner with his wife who said they only saw her drink water and lemonade. The Tribune reported Allen sent the media organization a copy of his wife’s receipt, which shows no charges for alcoholic beverages.

In the video, West said he was especially upset that his grandson was left on the side of the road with two police officers until the child’s father picked him up.

“I support the thin blue line, but this is insidious,” West said. “They put my grandson at risk, at jeopardy, left him with a couple of police officers and carted his grandmother to jail and she had water and lemonade. … I’m beyond livid.”

WFAA, a Dallas ABC affiliate, reported Graham-West was pulled over after failing to signal for a turn. Police gave her a field sobriety test that led to her arrest. During the test Graham-West told police she would be “a little off balance in some of the exercises” due to an aneurysm she suffered previously.

Last June, West, a former Congressman from Florida, called the Black Lives Matter movement the “overseer of the left-wing plantation,” and in 2014 called for former President Barack Obama’s impeachment, citing the swap of five Taliban prisoners of war held by the U.S. at Guantanamo Bay, Cuba, for Sgt. Bowe Bergdahl, the American prisoner of war.