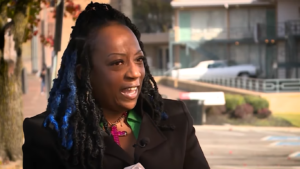 Moses told WREG, a Memphis CBS affiliate, the situation began in 2015 when she pleaded guilty to a 10- count indictment that included charges of perjury, stalking, forgery, and tampering with evidence, a crime that strips a resident’s right to vote.

The BLM activist said she was charged after complaining about elected officials and spent five months in jail on a $500,000 bond before pleading guilty to the charges.

Moses thought the incident was behind her and, in 2019, applied to have her voting rights restored. However, she was shocked to find out she was charged with falsifying information on her voter registration, and her trial was set for Nov. 1.

“I didn’t even know I was going to trial until like a few days before this,” Moses told WREG.

She refused to take a plea, and the 12 counts of illegal registration for voting were dismissed almost immediately as prosecutors could not prove she intentionally registered illegally. As a result, Moses’ application to have her voting right restored was approved by Department of Corrections (DoC) officials on Sept. 3, 2021.

The next day, Moses received a letter saying the DoC was wrong in restoring her voting rights because she was convicted of a felony, permanently terminating her right to vote.

“They want to pick and control who the Black leaders are in the South. And they do it through voter suppression. They suppressed my right to vote forever,” Moses said.

Voter suppression has been an ongoing battle between Republicans and Democrats in recent elections and shows no signs of letting up.

The reversal landed Moses back in court, this time on perjury charges and falsifying an election document. Shelby County Election Administrator Linda Phillips said the situation was something she’s never seen before.

However, that didn’t stop District Attorney Amy Weirich from taking the case to trial, where Moses was found guilty of illegally registering to vote in 2019.

Moses faces four to eight years in prison, despite maintaining she never actually voted but only registered to do so. She will be sentenced Friday, Dec. 10.

Despite the outcome, the BLM activist says she will keep fighting voter suppression because it’s paramount to America’s future.

Virginia Mother of Five Fell On Hard Times, Asks For Help and Her Local Community Showed Out