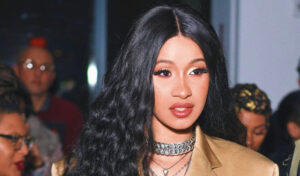 Cardi B continues to throw her name in the history books with her latest achievement!

The Bronx-bred rapper announced via her Twitter account that she had earned another diamond record (10 million records sold) through her collaboration with the popular group Maroon 5.

This feat makes her the first female rapper to have more than one diamond record. Bodak Yellow, off her debut album, was her first. Girls Like You, which was recently certified diamond, is the record that placed Cardi B in the history books!

Wow I got two Diamond records! Thank you sooo much @maroon5 for including me on this song and this is the song I cater to my daughter every time I perform it.I’m forever grateful 🥲

This past Monday, on Nov. 29, the Recording Industry Association of America (RIAA) announced the 2018 collaboration with Maroon 5, Girls Like You, exceeded 10 million units in sales in the United States.

Chart Data also reported that Cardi B is only the third woman to have more than one diamond single. The other two are Katy Perry and Lady Gaga. Perry has a total of three.

HipHopDX reported what Adam Levine of Maroon 5 had to say about the breakout entertainer at the time of the recording.

“She was in the honeymoon period of her moment. She was just beginning to be that female artist that everybody was talking about, and I thought it was an important thing for her to be involved. I knew she would have an interesting take on what was being said, and she would do it in a way that you wouldn’t necessarily have thought of.”

Symone Sanders Will Leave The Biden Administration At Year's End