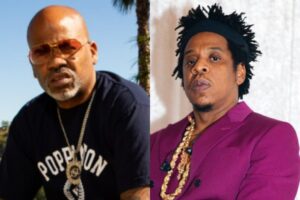 After receiving a shoutout on a major stage, Roc-A-Fella co-founder Damon Dash is ready to bury the hatchet with his former business partner Jay-Z.

While accepting his induction into the Rock & Roll Hall of Fame last week, Jay mentioned a name he typically avoids bringing up in public spaces.

After catching wind of the special shoutout, Dame is ready to extend an “olive branch” in hopes of ending their decades-long feud.

“It was beautiful,” Dash told Page Six. “I’m glad he said it for the culture. We need to squash everything. So hopefully, if that was an extended [olive branch], I’ll spin one back.”

While noting how surprised he was by Jay mentioning his name, Dash expressed his hopes to end their ongoing legal war and talk things out like men.

“I have no beef with [him] if [he has] no beef with me,” Dash added. “Let’s get the lawyers out of it then. Let’s talk like men, but I definitely appreciate it.”

Jay and Dame first linked up in the early ’90s and launched their own record label with Jay-Z at the forefront. By the late ’90s, Roc-A-Fella was a dominating force in hip-hop, and all the fame, money, and attention eventually put a major dent in their friendship and business relationship.

In 2004, Jay-Z sold the remainder of Roc-A-Fella to Def Jam, where he was already named president. The move ended Roc-A-Fella and ended Jay and Dame’s relationship for good. Last year, Jay-Z took legal action against Dame after he attempted to sell “Reasonable Doubt” as an NFT.

At the time, Dash blasted Hova, calling him a “liar” and a “bully.” But now Dash is hopeful the two can come back together and create a major moment for the culture.

“I would never want you to think that we have to go to the court to resolve anything,” Dash said. “We can talk it out and the culture needs to see two strong black men working out a problem. Even if they worked together, they can go their separate ways, they can still be cool.”