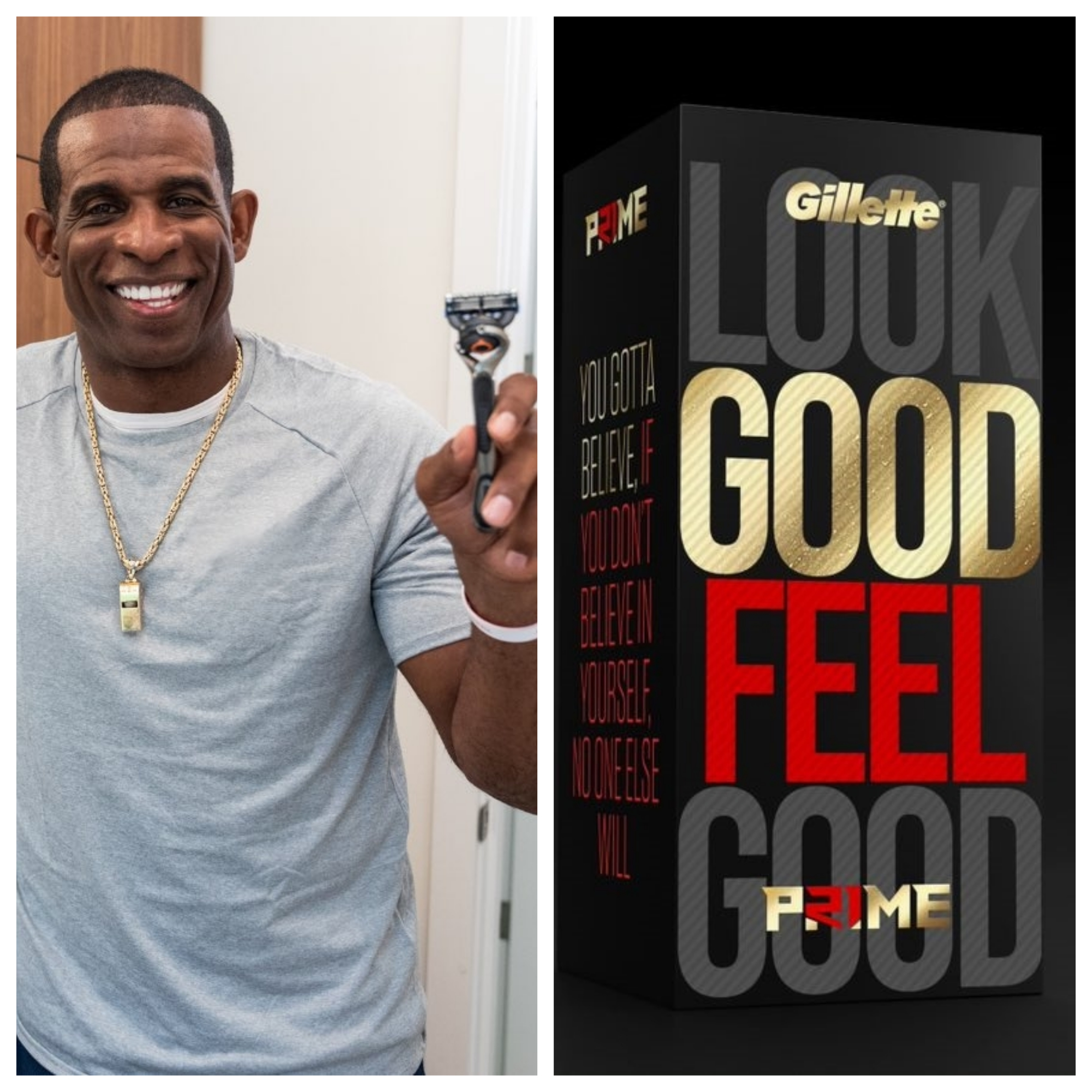 The importance of looking good should be paramount when it comes to choosing your path to success, no matter the career path you seek. Jackson State University’s football coach, former NFL player Deion Sanders, knows this and practices what he preaches.

The two-time Super Bowl winner also played professional baseball and is the only athlete to play in both a Super Bowl and a World Series. “Prime Time” is known to be successful in almost whatever he is involved in. We may know him for his sports career, the reality shows, and the business dealings, but one has to admit, he has always shown a sense of style, specifically when it comes to grooming.

His latest partnership is with Gillette razors under his “Look Good, Feel Good” credo. BLACK ENTERPRISE got the opportunity to speak with the former football player as he discussed the Gillette collaboration, why he decided to coach at Jackson State University, and the importance of everyone attending HBCUs.

You’ve partnered with Gillette to release a limited edition Gillette x Deion razor. What prompted you to collaborate with the company, and how will this partnership benefit The JSU Tiger Fund Athletic Foundation at Jackson State University?

First off, I’m really excited to announce that Gillette is donating $50,000 to The JSU Tiger Fund Athletic Foundation to help us academically, which is a blessing. Also, when you enter for a chance to win the razor, Gillette will donate $1 to The Tiger Fund, for every entry, up to $50,000. Secondly, it’s always been a dream of mine. I’m a shaver, I know how to shave, I shave daily, and I don’t have any razor bumps whatsoever, so to partner with a powerhouse like Gillette is certainly a dream of a young African American man or man of any ethnicity, and just to have this relationship to come up with a specially designed razor makes me very happy. Gillette is giving this razor away for free , and all you have to do is visit GillettexDeion.com between December 7th – 20th to enter for a chance to win one of 200 razors. I’m just elated about this partnership overall.

You’re known for always being groomed, stylish, and presenting yourself in a commendable way. How did the “Look Good Feel Good” directive with Gillette come about and what inspired the design for this limited edition razor?

The “Look Good, Feel Good” saying is something I’ve embodied since I started playing the game. As a young kid, I always wanted to be the best dressed, best athlete, best student, the best in any endeavor that I was involved in. I wanted to look the part and the saying, “Look Good, Feel Good,” is something we played off, and having Gillette as a partner to help me roll with that and take it to another level with the shaving aspect has been great. I love to be well groomed. I love to look good and make sure that I don’t have any razor bumps because I know how to shave and prepare for my face, which helped me with this razor’s design. Anyone I partner with, it’s not going to be just a normal partnership. I endorse things that I believe in 110%.

We know you from your college and NFL playing days, your reality television show, and the many things you’ve done over the years. Why did you decide to become a football coach at Jackson State University?

I’ve always been a coach, even when I played in youth, high school, college, and pros. I’ve always instructed, always taught, and worked well with the other coaches to influence other players on our team. I coached all my kids’ teams, and I got into coaching with one of the largest youth organizations in the country out of Texas, and it just kept going from there. Once I concluded my high school coaching duties, my sons were going off to college and I was pretty much going to chill and just support them. But soon after, several opportunities came up. We prayed about it and felt like this one was the best opportunity to change the narrative and culture and bring attention toward these young men and women who chose these HBCUs. They need that attention to go to the next level.

You’ve stated numerous times the importance of Black students attending HBCUs. What do you think would motivate more student-athletes to do so when the allure of non-HBCUs is so appealing?

I don’t just want Black students to attend HBCUs; I want everyone who has a heartbeat and blood running through their veins to choose a place that suits them. It just so happens that I know and I’m familiar with HBCUs, especially over these last few months, and it’s a wonderful place for academics, culture, lifestyle, and to just grow as a man or woman. I’m happy that I’m here and would rather be in no other place at this time in my life than here. I’m definitely where I’m supposed to be, and that’s why we’re winning and changing the game.

For the players on the JSU football team that won’t get the opportunity to play professional sports, how will you prepare them for life after college?

Every day is a life lesson. I’m not just a football coach; our coaches are not just football coaches. It is our job to prepare them for the next stage in their life and not just on the sports side. We want these kids to go on and have six/seven figure careers, and some of them are very capable. They’re smart, tough, they learn fast, they have discipline and character. I think HBCUs are very viable. It started off as an alternative for us to go to as a people, and it’s more than that now. I’m happy that my two sons are with me, and I have expectations of my daughter, who is a basketball player, a senior in Texas, to attend one next year as well.

As a businessman, how are you able to separate your current commitment to coaching football and conducting your business ventures?

Football is the main thing, and we’re always going to keep the main thing, the main thing. It just so happens my ventures enhance what we do here at JSU and provide a lot of exposure because when you associate me with a product as promising as Gillette, and you see me in a commercial, you’re going to associate that with JSU, and that’s a plus for us. It’s a tremendous recruiting tool, and a lot of our young men want me to explain to them how this type of relationship between Gillette and I occurred and just want to learn more about endorsements. I’ve been able to give firsthand knowledge from my career over 20/30 years in the game and in the game of life of just making things happen.

What advice would you give anyone seeking to pursue their passion and want to be a successful entrepreneur?

You have to believe. You just have to believe. If you don’t believe in yourself, no one else will. I embody that, and I’ve been believing in that since I was a child. I believed my way to Gillette and so many other fascinating things in my life, and I’m thankful for the position I’m in. And I’m going to take full advantage of it and hopefully prepare others to be in this same position as well.

38 Affordable Experience Gifts for the Holidays