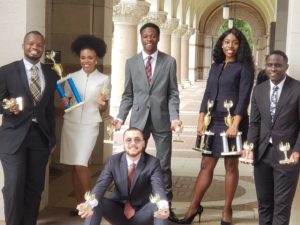 The fourth $100,000 payment of  $1 million dates back to a promise made in 2007 to lend a hand to students at the historically Black college in Texas, according to a press release. Funds provided by Denzel Washington’s Family Foundation cover signing up debate team representatives who want to embrace the challenge of membership. Additionally, money is used to fund their scholarships.

The special gift of resurrecting the debate team helps to keep a scholarly traditional alive.

“Being a dominant force as home of The Great Debaters makes us a very attractive option for those skilled in debate, and this financial support further amplifies the benefits of becoming a Wiley debate scholar,”  Wiley College President Dr. Herman J. Felton said in an announcement.

In a 2007 film called “The Great Debaters,” Washington portrayed Melvin B. Tolson—who was Wiley College’s infamous debate team coach. In the 1930s, the skilled professor guided Wiley College’s team to achieve a 10-year record of beating the competition. He also was a leader who broke barriers to integrate collegiate debates in segregated times.

“We are honored to continue supporting the best and the brightest in the land and look forward to The Great Debaters continuing to do what they do best: win,” Washington said in  2018, according to Wiley College’s press release.

Jaylon Bolden is a recent Wiley graduate who received support as a debate team member. After receiving $80,000 in scholarships from Denzel Washington’s Family Foundation, the ability to keep the Wiley debate keep legacy going is an experience which made a permanent impact.

Washington’s generosity speaks volumes about his passion to give back to young people who need more leaders to help them along.