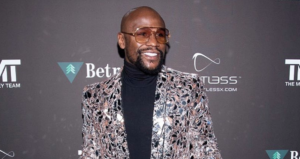 Over the weekend, retired boxing great Floyd Mayweather left his guard down, so to speak.

According to TMZ Sports, the undefeated boxing champion was seen on a mobile phone video clip rejecting a teenage boy’s request to take a photo with him and stated that it’s because the fan had his fingernails painted.

Mayweather, along with his bodyguards, attended the Los Angeles Clippers versus Memphis Grizzlies basketball game at the Staples Center on Saturday. After the contest, a teenage boy approached Mayweather and to see if he could get a shot with the retired boxer. In the clip, Mayweather rejects his request as his bodyguards move in to prevent the boy from accessing him. You can hear Mayweather say “You got painted nails, I don’t take pictures with guys with no painted nails.”

The interaction caused a shocking reaction from the fan. “Damn bro,” he says as the boxing great walks away, “Floyd’s a homophobe.”

As the bodyguards block him from Mayweather and they start to walk away, the fan then says, “Floyd doesn’t want to take a photo with me ‘cause my nails are painted. Bruh, really? I didn’t mean to rush him like that.”

TMZ said witnesses saw Mayweather taking pictures with several other fans and didn’t turn down any other requests.

In a later update, a representative from Mayweather’s camp said that Floyd didn’t take the photo because he was in a rush to leave the arena after the basketball game. The rep also clarified that the teenager’s accusation of Mayweather being homophobic couldn’t be further from the truth.

On Monday, via his Twitter account, Mayweather read an open letter to Brooklyn Nets player, Kyrie Irving for standing up for what he believes in.

Choice is defined as an act of selecting or making a decision when faced with two or more possibilities. America gave us the choice to take the vaccine or not take the vaccine. As time moves on, that choice is gradually being stripped from us. pic.twitter.com/7F6RsWaDkL