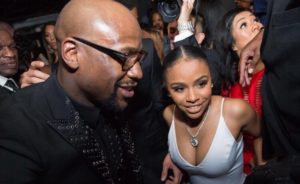 According to The Jasmine Brand, Floyd’s daughter, Yaya Mayweather, is facing some lengthy prison time for a case that alleges she stabbed a woman multiple times at the home of her baby father, NBA YoungBoy.

According to the outlet, Mayweather was arrested in April 2020 and charged with aggravated assault with a deadly weapon. She is accused of stabbing NBA YoungBoy’s baby mother, Lapattra Lashai Jacobs, resulting in serious injuries and hospitalization.

It’s been reported that Mayweather is facing up to 20 years in prison if and when the case goes to trial. In January, the 21-year-old Mayweather and the 21-year-old rapper, singer, songwriter welcomed a baby boy, making the addition NBA YoungBoy’s seventh child.

Yet, Mayweather isn’t the only one with legal troubles. NBA YoungBoy is currently incarcerated.

TMZ reported earlier this year that the Baton Rouge rapper was taken into custody on March 22 in Los Angeles on an outstanding warrant based on 2020 drugs and weapons-related charges. NBA YoungBoy was accused of leading police officers on a high-speed chase before continuing to escape on foot. Prosecutors claim that a firearm was found inside the car he was in as the car’s sole occupant.

Earlier this week, his attorneys presented their case for house arrest on Monday, requesting the rapper be relocated full-time to his Utah residence. As reported by The Advocate, his attorneys brought to light that NBA YoungBoy would construct an in-home studio to continue to work on music and be closely monitored by a private security firm staffed by former military soldiers.

Chief U.S. District Judge Shelly Dick has rejected allowing NBA YoungBoy out on bond, saying that the rapper “is inclined toward reckless, illegal, dangerous behavior” and could potentially be a danger to the community.