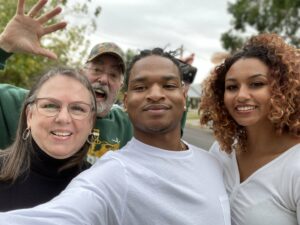 Six years ago, Wanda Dench accidentally invited a stranger to Thanksgiving dinner, thinking she’d texted her grandson. Years later, she and the accidental invitee, Jamal Hinton, are celebrating yet another holiday season together.

Hinton announced he and Dench were “all set for year 6!” on Twitter. This is the sixth straight year they’re spending Thanksgiving together, Yahoo Life reported. Along with the announcement, Hinton tweeted a screenshot of his recent text conversation with Dench.

We are all set for year 6! 🦃 pic.twitter.com/wEQioizWGd

“It would bring me great joy if you, Mikaela and your family would come to my house on Thanksgiving day to share good food and great conversation. Your friend always, Wanda,” Dench said in her text, inviting Hinton and his girlfriend over.

In 2016, the two went viral after—thinking Hinton was her grandson—Dench texted him saying she’s hosting Thanksgiving dinner and she’d love it if he could attend.

The two then swapped photos.

“You not my grandma,” Hinton wrote back. “Can I still get a plate tho.”

Dench replied, “Of course you can. That’s what grandma’s do …feed every one.”

The rest is Thanksgiving history.

Dench and Hinton, along with girlfriend Mikaela, gathered with a small group of Dench’s family before Thanksgiving. Even “the grandson that originally started all of this by changing his phone number and not telling me he changed it” showed up, Dench told TODAY in 2020.

The gathering was the first Thanksgiving since Dench’s husband, Lonnie, passed from COVID complications in April 2020.

After Lonnie’s passing, Hinton tweeted a video of him and the couple sharing lunch as a tribute.

We miss you Lonnie💔 pic.twitter.com/t9lXt31FLw

Dench told TODAY her relationship with Hinton has changed her life.

“Jamal taught me that age made absolutely no difference,” she said last year. “I love all of my grandkids and kids, but we all are different generations and we all reminisce about different things. But when Jamal came along, my husband and I and him and his girlfriend, we would go out to dinner throughout the year together, and we would just lose all track of time.”

“That’s when it dawned on me that there doesn’t have to be a generation gap to have friendships,” she continued. “So now I look at a lot of young people in a different light than I used to and I make it a point to talk and get to know them.

He’s changed my life a lot; I know that.”

The Best Dog-Friendly Things To Do in Long Beach, California • The Blonde Abroad