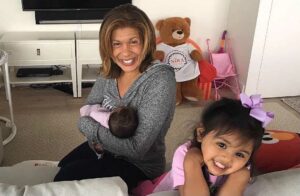 Co-anchor at The Today Show, Hoda Kotb, is living her dream after adopting two children with her spouse and preparing for a third.

Kotb, 57, shared intimate details about her journey to becoming a mother on People’s new podcast, “Me Becoming Mom.” One of her greatest fears throughout the process was sharing with her fiancé Joel Schiffman, 63, that she wanted to adopt children. She was afraid the idea would end their relationship.

“‘I said to him,’ Joel, I have to ask you something. I haven’t been sleeping well lately because it’s been weighing on me and I can’t carry it anymore,” she revealed.

“So I’m going to say something to you and I don’t want you to answer me right now. I want you to sit with it and take your time. Don’t answer. Just take a week, take as long as you need,’” she recalled. “And he was like, ‘What is she going to tell me?’”

‘I looked him in the eye and I said, ‘I would like to explore adoption with you.’ And there was like a second in there, I was like, ‘This is the end of a relationship or the beginning of a family,’” she said about Schiffman.

“I said, ‘I chose right. I chose a man who chose my happiness over his convenience maybe in that moment,’” Kotb said about the moment.

The journalist was diagnosed with breast cancer and treated for the disease at 42-years-old. After treatment she was no longer able to conceive children.

Schiffman has a  27-year-old daughter from a previous relationship.

He proposed to Kotb in 2019 at a romantic Mexican getaway. Their wedding has been postponed twice due to the pandemic.

The couple now have two adopted daughters together; four-your-old Haley Joy whom they adopted in 2017 and two-year-old Hope Catherine who came two years later.

“I tell them they were adopted, and I’m not sure if they 100 percent know what that means,” she said. “I always say, ‘You didn’t come from Mommy’s tummy, you came from my heart.’ And they understand that.” Kotb said.

The mom plans to go deeper with her children about their adoption when they’re older and can better understand it.

“I tell them how cool it is. I tell them that their cousin Ella was adopted and, you know, ‘All the cool kids were adopted’— they get such a kick out of that.”