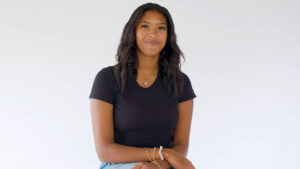 In a rare interview with a modeling agency she recently signed with, Kobe Bryant’s daughter opened up about the relationship with the deceased Los Angeles Lakers legend.

In an exclusive video on the YouTube channel of IMG MODELS, Kobe and Vanessa’s daughter, Natalia Bryant, responds to questions posed to her in a segment titled, GETTING TO KNOW: Natalia Bryant.

Entertainment Tonight reported that back in February, Natalia signed with IMG Models.

She says in the interview: “My dad and I would always watch as many movies as we can and we’d go on, like, movie marathons,” she says in the video. “And then we’d always analyze as many movies as we can and we’d talk about it for months, anywhere we’d go we’d just keep talking about different films and how it, like, reminds us of where we are. Like, oh my gosh, that architecture reminds me of, like, this piece from this film. So, it’s just things like that, it just really inspired me and I was like, ‘I want to do this, forever.’”

Natalia does state that she wants to follow in her father’s footsteps, who won an Oscar back in 2018. Kobe won for Best Animated Short Film for Dear Basketball. She would like to do that in 10 years.

“I’m not sure for what, or for what Oscar category, but that’s on my list,” she says. “And I want to make a film where I can incorporate fashion and those fashion aspects, and I think combining my two passions, like, that’s just amazing. I want to be able to do that.”

Check out the full interview below.

Bryant played his whole 20-year NBA career with the Los Angeles Lakers. He was a five-time NBA champion, a two-time Finals MVP, and the league’s most valuable player in 2008. Bryant made the All-Star team 18 times and was the youngest player ever to reach 30,000 points during his career. Bryant retired from the NBA in 2016, scoring an NBA-season-high 60 points in his final game.

The 41-year-old basketball legend died in a helicopter crash in Calabasas, California, along with his 13-year-old daughter, Gianna, and seven other people on Jan. 26, 2020.

Worst Fitness Advice: What Not to Say