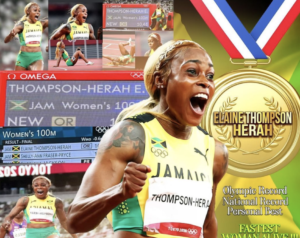 On Saturday, Jamaican track star, Elaine Thompson-Herah, did the unthinkable at the Tokyo Olympics. The 29-year-old athlete won a gold medal and broke a 33-year-old Olympic record– all at the same damn time.

According to ESPN, Thompson-Herah ran her fastest 100 meters ever in an astounding 10.61 seconds. She beat the late, great Florence Griffith-Joyner’s Olympic record set at the 1988 Olympics in Seoul by .01 seconds.

The irony of her victory is she was unsure if she had broken the three-decades-long record– but she knew she had won the race.

“The pointing, I don’t know what it means. To show that I was clear,” Thompson-Herah expressed to ESPN.

Her win, along with her two teammates Fraser-Pryce and Shericka Jenkins’ wins, cemented Jamaica’s gold, silver and bronze medals for the race.

The champion also posted a tweet celebrating her victory.

“Just a lil girl from BANANA GROUND who liked to run. Believe In your dreams work hard and have faith in God…ETH,” she wrote.

Just a lil girl from BANANA GROUND who liked to run. Believe In your dreams work hard and have faith in God…ETH pic.twitter.com/UrR7UuGZGO

Jamaicans, on the internet, went up for Thompson-Herah’s historic win, as well as her fellow countrywomen.

Congratulations. You all did Jamaica proud.

And we all agree with Granny when she said: pic.twitter.com/WEK9IBqhhQ

Congratulations Sis So proud of you. You did us WELL. With #Jamaica‘s upcoming independence week ahead, you’ve all given us much to celebrate, be proud of. Gwaan wid yu bad self nuh. Yu bruk di record an dash it weh. Yu dun know seh yu run tings #OneLove

Yesssss Queeen Elaine… you did it!! We are so proud pic.twitter.com/N9sspozrUv

JAMAICA IS SO PROUD OF YOU!! EVERYBODY IS!!! ❤ pic.twitter.com/IMCH5QkRtH

Yes girl! We are truly proud and you are all national treasures to us Jamaicans! Let the world know

Congratulations to the ladies of Jamaica!

3 reasons why Ethereum price might not hit $5,000 anytime soon