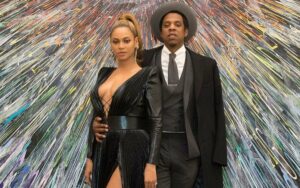 Jay-Z and Beyoncé are among the newest brand ambassadors of Tiffany & Co. The partnership was revealed in the “Icons” edition of Harper’s Bazaar, which featured Beyoncé as the cover star. The partnership is just the latest venture for the couple.

According to CNBC, Jay-Z and Roc Nation invested in Michael Rubin’s Fanatics, a sports merchandise company worth $18 billion. At the same time Beyoncé is gearing up to release her Ivy Park Rodeo collection with Adidas later this month.

Beyoncé wore items from her collection with Adidas in the photo shoot along with several Tiffany jewelry pieces. She told Harpers in her interview the Ivy Park collection that she was inspired by the Houston rodeo scene.

“We were inspired by the culture and swag of the Houston rodeo,” she said. “This collection is a mixture of my childhood growing up in Texas and a bit of American history. I grew up going to the Houston rodeo every year. It was this amazing, diverse and multicultural experience where there was something for every member of the family.”

As part of the agreement, the couple will front upcoming campaigns and introduce new and exclusive jewelry for Tiffany.

According to High Snobiety, Tiffany has been testing new marketing strategies in an effort to refresh and update its products and image. One campaign that worked included an April Fools Day joke that the jeweler was changing their iconic blue color to yellow. Tiffany also started another ad campaign dubbed  “Not Your Mother’s Tiffany’s.”

In 2019, Jay-Z became the fifth Black billionaire in the U.S. and Forbes values Beyoncé’s fortune at $420 million.

Navy Master Chief And Daughter Served On Same Ship Together