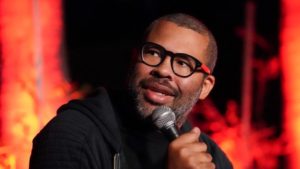 If you thought Jordan Peele was going to make a big splash when announcing his newest horror flick, the answer is simply….Nope.

The Academy Award-winning director took to Twitter to share the first official promotional poster for his upcoming film Nope on Thursday. Not much is known other than what the poster teases.

“A new terror from the mind of Academy Award winner Jordan Peele,” the poster reads while showing an ominous grey cloud floating over a city. It goes on to reveal the lead cast and release date.

It looks like Daniel Kaluuya has teamed back up with Peele for another chiller following the success of the 2017 box office smash Get Out. He was listed alongside Keke Palmer, who is acting in her first Peele production. South Korean actor Steven Yeun is also set to star in the film and has the horror genre experience locked down after appearing in The Walking Dead.

Peele made the big announcement one year before the film’s release slated for July 22, 2022. The poster also says that the film will only be in theaters. A hint at Hollywood’s return to forcing audiences out to the movie theaters rather than enjoying the movie release on a streaming provider like 2021 releases from Disney’s Black Widow and Cruella to Warner Bros. release of Godzilla vs. Kong and Space Jam: A New Legacy.

Despite only having two films under his name, Peele has proven to bring out a crowd. His 2017 debut Get Out proved to be a commercial hit, raking in $255 million in global ticket sales and earning four Oscar nominations, Variety reports. His second film, 2019’s Us, generated $255 million worldwide.

After making the announcement, fans reeled in excitement despite having to wait a year for its release.

“Soooo Can I buy tickets now,” one person asked. “Man don’t have me out here scared of clouds bruh,” added someone else.

It looks like we’ll just have to wait and see what Jordan Peele has in store for us next.