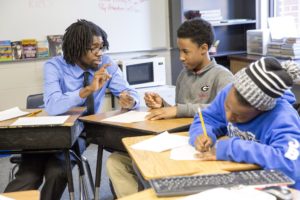 The inaugural ‘Call Me Mister’ program at Kennesaw State University kicked off to increase the number of Black male teachers in American classrooms.

Cameron Barron is a senior within the school’s program, dubbed ‘Mentors Instructing Students Toward Effective Role Models,’ 11 Alive reports. He comes from a legacy of Black educators, which inspired his induction into the program.

“My mom’s an educator. My nana’s a pre-K teacher. My auntie’s a spare teacher,” Barron said. “So it’s just kind of in me already, but now it’s being brought out of me. I’m ready for it.”

Barron recalled having little to no Black teachers while growing up and how long it took him to experience being educated by a Black male.

“I really haven’t had male figures or African American figures coming through school,” Barron explained to his fellow cohorts. “Dr. Glenn was my first African American male teacher I’ve had in like18 years of school.”

Dr. Tristan Glenn, associate professor and Call Me Mister program director, addressed the disparities plaguing many Black students because of the lack of Black educators, particularly among males.

“The unfortunate reality is males of color only constitute 2% of the teaching population,” Glenn said. “Representation matters. Simply put, very few males have actually been taught by someone that looks like them.”

Georgia’s former Pre-K Teacher of the Year, Johnathon Hines, explained how the disparities inspired him to pursue a career in education.

“A lot of times students don’t have a father figure or a role model they can look up to,” Hines said. “But they can come to the school and see us, male teachers doing great things every day.”

Now students in the Call Me Mister program, like Barron, are looking forward to inspiring the next generation of Black scholars.

“If I can change just one student’s perspective on life,” Barron said, “That student can change another person’s life, and it’s just a domino effect.”

US census: Hispanic and Asian-American driving US population growth