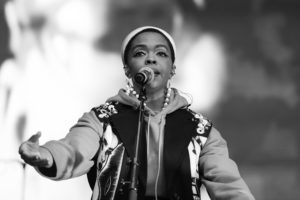 L Boogie is back like she never left, and hip-hop fans are here for it!

Lauryn Hill became a trending topic on Friday following the release of Nas’s new album King’s Disease II. It’s on the track “Nobody,” where the two Grammy Award winners reunited for a second time since their 1996 classic “If I Ruled The World.”

Hill’s verse on “Nobody” was the first time fans have heard her rap on a track in over 20 years. Music lovers have been craving new music from Hill following her 1998 solo debut, The Miseducation of Lauryn Hill.

With Hill being known to live a private life outside of the public eye, she seemingly used her new lyrics to address all the gossip about showing up perpetually late to concerts.

Her bars and lyrical delivery sent hip-hop fans into a frenzy on Twitter, with many declaring L Boogie the queen emcee.

“Lauryn Hill showed up to the Nas album ready to remind everyone there’s a crown on her head,” one listener said.

“Lauryn Hills verse on Nas new album is so good,” added someone else. “I’m so mad that we’ve been deprived of Lauryn’s amazing rap skills for almost two decades at this point?”

Lauryn Hills verse on Nas new album is so good. I’m so mad that we’ve been deprived of Lauryn’s amazing rap skills for almost two decades at this point?

Hill has made a rare appearance on tracks in recent years. Her most recent releases include 2019’s Guarding the Gates” from the Queen & Slim soundtrack and “Coming Home” with Pusha T. In 2020, she appeared on Teyana Taylor’s “We Got Love.”

With it being such a rare occurrence for Lauryn Hill to even feature on a song, let alone release one of her own, it’s no wonder why she became a trending topic. L Boogie just took some time to readjust her crown.