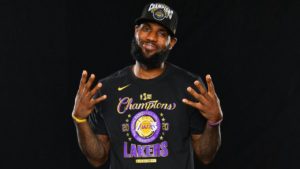 Just two weeks ago, it was reported that Los Angeles Lakers’ centerpiece basketball player, LeBron James, would likely claim the title of a billionaire by the end of the year.

No one realized that the timetable was off by approximately five months. It is now being reported that King James has earned the title of the first active NBA player to actually earn $1 billion over the course of his still-growing career.

According to Sportico, with the opening weekend total of James’ Space Jam: A New Legacy movie (which he produced and starred in) coming in at $32 million, it places him in a very rare category, billionaire status.

James is still chasing the accomplished and arguably the G.O.A.T.—professional basketball player Michael Jordan—when it comes to NBA championships. James has four titles under his belt versus the six Jordan secured with the Chicago Bulls. However, the Los Angeles Laker has achieved billionaire status as a current player, something Jordan couldn’t do.

James made sure his detractors and critics knew of the box office success of the sequel to his hero’s movie, the original Space Jam.

The comparisons between the two have been never-ending since James entered the league with the hype of having a comparable or even better career than Jordan.

Just last week, it was reported that the media and entertainment firm, SpringHill Co., which is led by James and his business partner, Maverick Carter, is in early talks with potential investors to possibly sell a piece of the property that has a valuation of up to $750 million.

The King, as he is referred to, is the NBA’s top-earning player for the seventh consecutive year, and that includes his off-court income, as the 2016-17 season was the only season of his professional basketball career that James had the highest playing salary in the National Basketball Association.