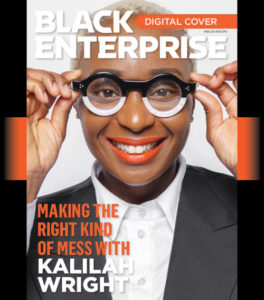 This installment of Black Enterprise’s Empathetic Modern Leaders Series sponsored by Lexus focuses on Kalilah Wright, the founder and CEO of MESS In A Bottle.

Mess In A Bottle is an apparel brand that puts personalized, positive messages on shirts and clothing as well as handbags and onesies and packages them in a reusable bottle. Additionally, MESS In A Bottle helps new entrepreneurs figure out how to bring their business ideas to life through consultations, brand building, educational courses, and an accountability group that sets measurable goals and holds each other accountable.

Wright, a trained architect, merged her passions for fashion and architecture to pursue entrepreneurship and told Black Enterprise she began to push her business off the ground following Freddie Gray‘s death in 2015.

“This idea began in 2016, shortly after the Freddie Gray uprising in Baltimore,” Wright said. “This really prompted me to want to have change and to give a message to my community. Mess In A Bottle was developed in a time of chaos, but it allowed people to stand in solidarity with each other and to give a voice to the voiceless.”

Wright has always had a mind for entrepreneurship. She started her first business at the age of 12, charging classmates $0.35 a week to be part of a “cool club” she started. To this day, Wright still has laminated ID cards and accountant books of the group’s budget.

The Morgan State and Penn State University alum was born in Kingston, Jamaica, and raised in Brooklyn, New York. Wright said growing up in Brooklyn, she was able to see the community and people of her neighborhood work together to make it through the days and the struggle.

“I stood outside on the stoop, I braided hair with my friends, and I would see the community and the people, so when this incident happened in my Baltimore city community,” Wright said. “I really felt a sense of responsibility; it felt like this was happening to one of my friends and, even worse, my son.”

Wright said being a Black woman and an immigrant Black woman is what motivates her drive and purpose in her businesses. Wright also wanted to use her platform to elevate other Black women to achieve their dreams.

“I think that my upbringing, being from Brooklyn and seeing how hard my grandmother and grandfather worked as service people in America, really made me look at entrepreneurship,” Wright told Black Enterprise. “It made me feel like I needed to do something to be able to elevate myself and others within my community.”

31 Ideas to Get You Started