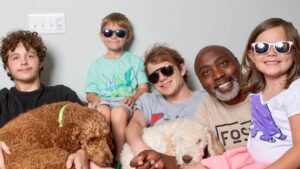 Peter Mutabazi says his life’s purpose is to help children in need. He became a licensed foster dad in 2017 and has hosted 12 different placements over the years.

Now, as the foster dad to 17-year-old Anthony and 16-year-old Kai, the Uganda native is working to pass on love, life skills, and the comfort of a home to the children under his care.

Anthony was placed with him in 2018 after being abandoned by his adoptive parents at age 11, Today reported. One year later, the father and son made their family bond official through the adoption process. Once the pandemic rolled around in 2020, Anthony started to encourage his dad to take in another teen.

“I think that maybe we should reach out to a teenager and give him a home,” Anthony told his dad last year, as noted by the Good News Network. “I already have a teenager,” Peter recalled telling Anthony.

But he remembered his childhood, fleeing an abusive father at the age of 10 and becoming a street kid up until a complete stranger took him in and changed his life for the better.

“I couldn’t ignore my history—the opportunities that had been given to me by strangers…and I know just how many kids out there have no one,” Mutabazi said. “I know what it feels like to have no dreams, no hope.”

Reflecting back on 2020 and the advocacy work he had done for teen-fostering and adoption with AdoptUSKids, Mutabazi felt compelled to help out even more.

In January, Mutabazi took to Instagram to introduce the newest addition to his family, 16-year-old Kai.

“When Anthony asked me to help a teen I couldn’t say no. Knowing how many youth are about to age out of foster care without a home we knew opening up our home was the right thing to do,” he wrote in his caption.

Mutabazi feels he’s only fulfilling his calling to help children in need. He has since welcomed two more children into his home, bringing the total to four.

“My goal (is) to lift up those who have been forgotten and to say you’re special you matter,” he said.

As they say, all heroes don’t wear capes.